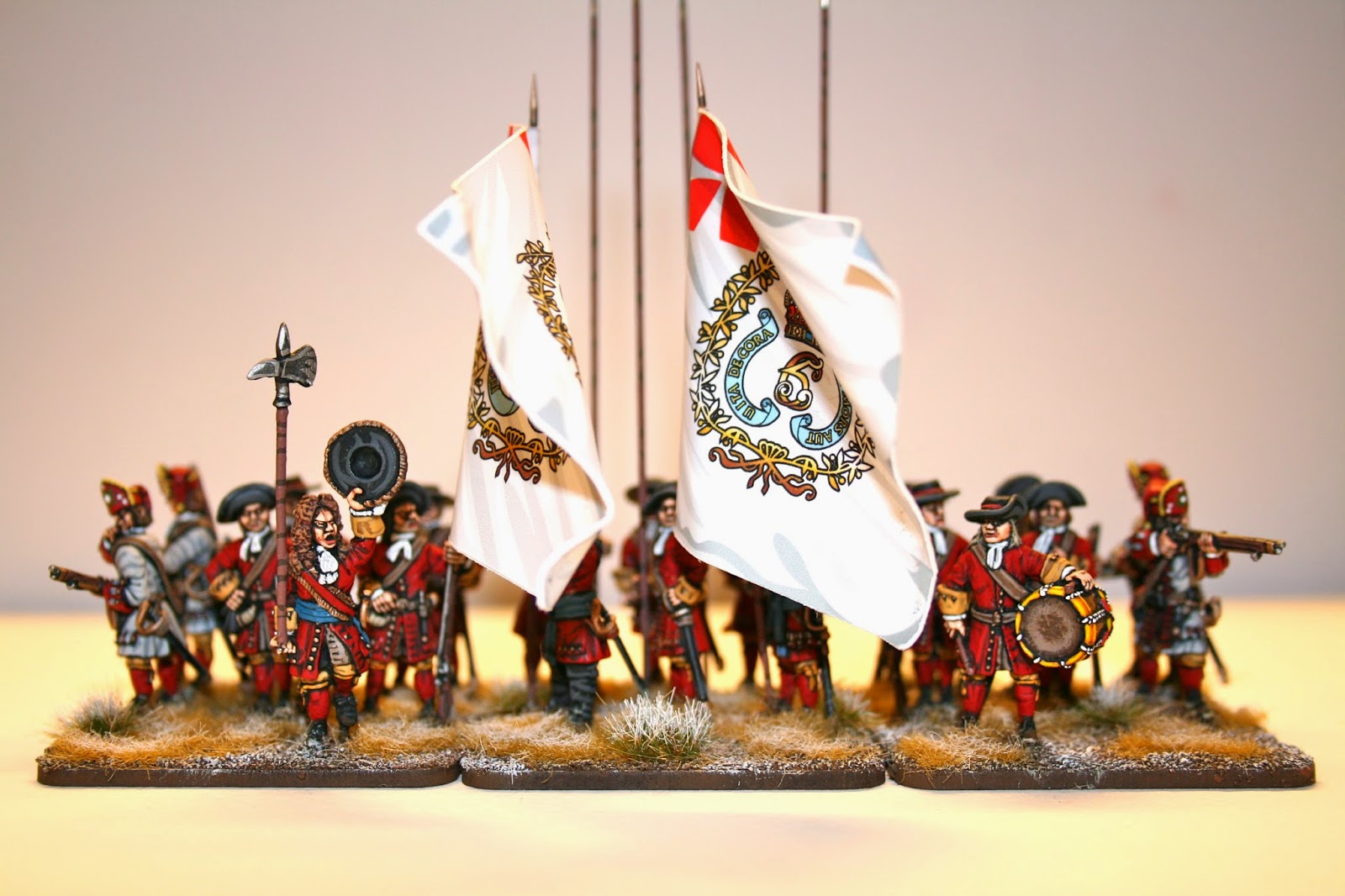 The Royal Danish Foot Guard is probably the most legendary Danish infantry unit of all time. It is also one of Europe’s oldest (more than 350 years), formed on the 30th of June 1658, and to this day active.

At the time of Lund and the Scanian War, the Foot Guards consisted of three battalions totaling 1.200 men. The Foot Guard was heavily engaged in the bitter infantry fighting of the centre at Lund, and losses are reported to be around a staggering 50% (!). 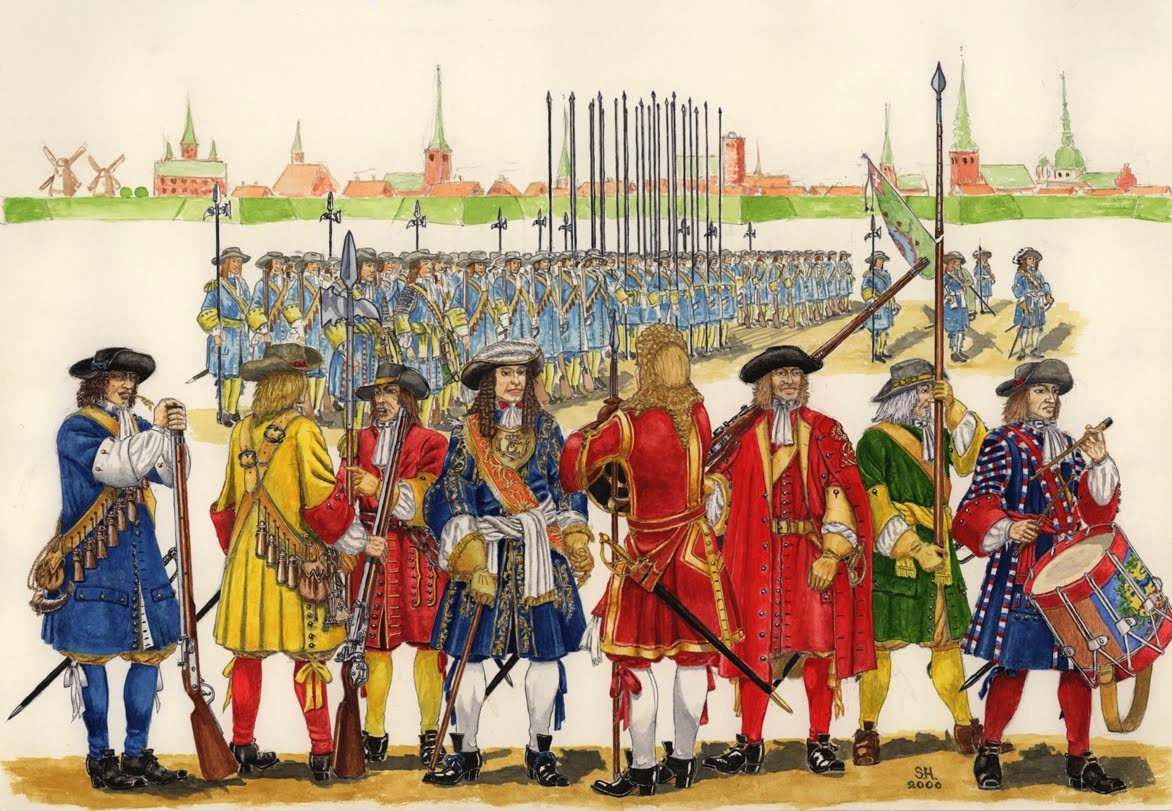 Third from the right - Guardsman with cassock.
All are Danish uniforms of the Scanian War.

At Lund on the morning of the 6th Dec 1676, the infantry of both sides had formed battle order with some hundred meters distance. Regimental artillery support had been deployed and the initial bombardment was about to commence, but then something strange happened. 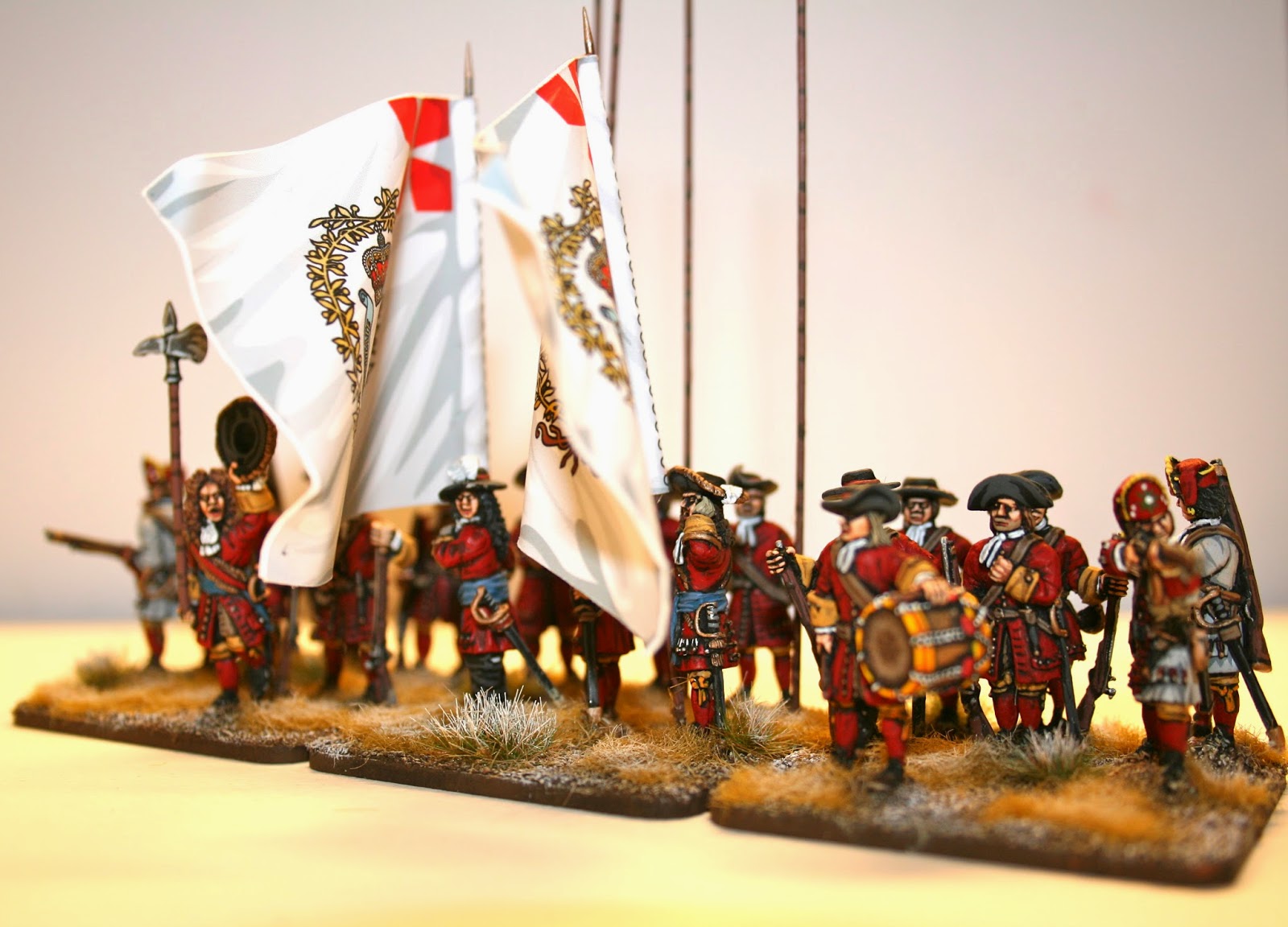 Pike in the center and muskets on each side.
Deployed like a typical unit of the period.

A Danish captain of the Foot Guard left ranks. Sword in hand, he walked forward across the frosty field on his own. The Swedes curiously studied the one-man army approaching. When he got far enough for comfort, he stopped and called out to the Swedish Guards, challenging their regimental leader for a duel. 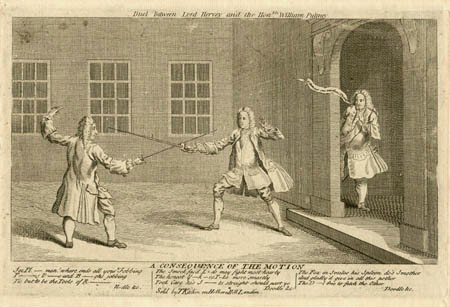 Duels - the quick fix to any argument

The Swedes, naturally couldn’t refuse this tempting offer, and forward came the very able Bernhard von Liewen, a Captain of the Swedish Foot Guards. Von Liewen apparently made a long story short, killed the lonely hiker, and return to the now cheering Swedish ranks with the Danish officer's sword raised above his head in triumph. This signalled the start of the infantry engagement, and artillery began mowing bloody lanes into the units on both sides. The battle was on. 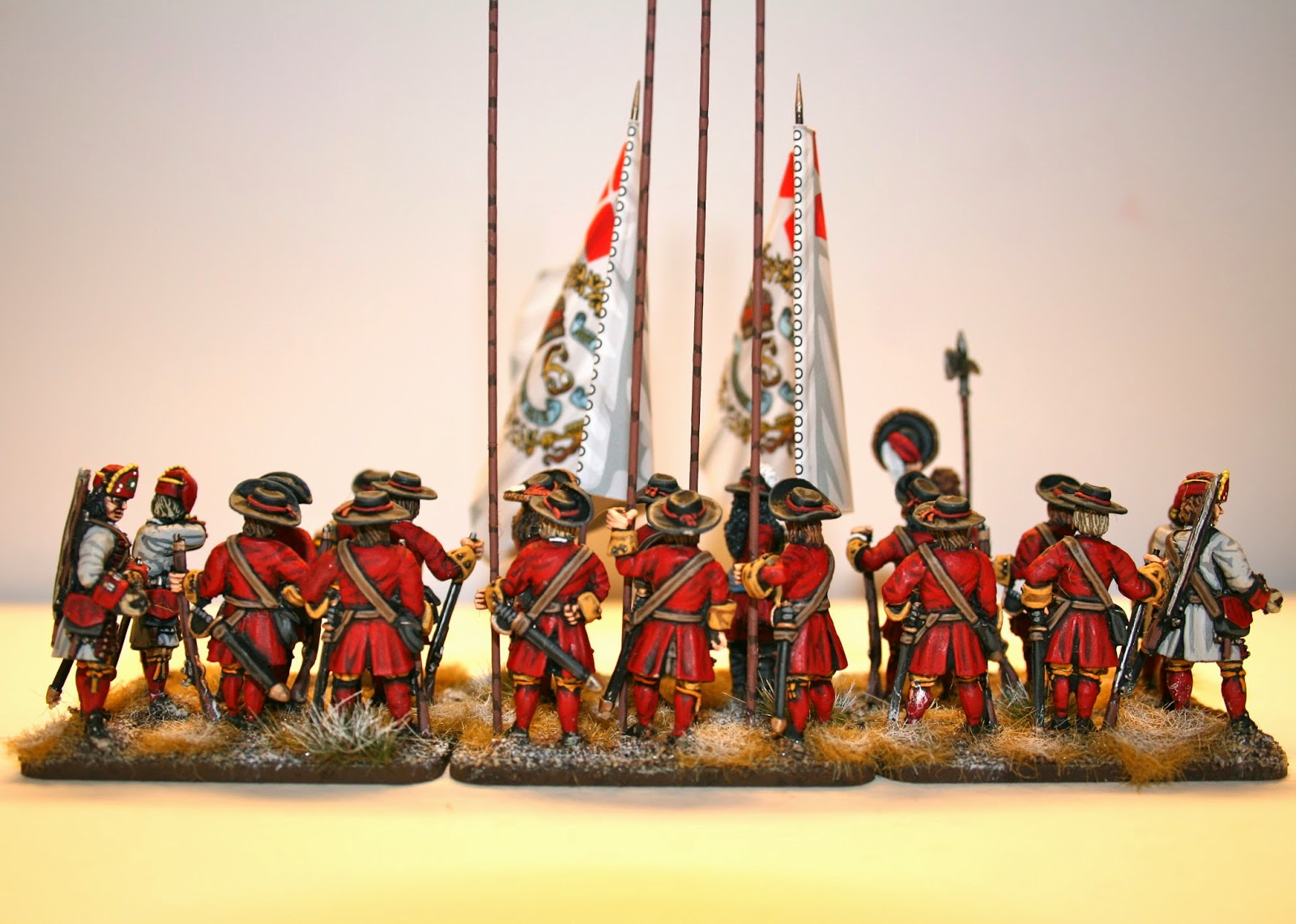 Coated them in three layers of red to really get the right tone.

As a later acknowledgment of the Foot Guard's valor and service to the Danish Crown, King Christian V in 1685 raised the unit to the highest status, detaching it from normal army command structure. This meant, that henceforth the Foot Guard was only accountable to obey orders directly from the King or the Army C-in-C (which in most cases would be the King). 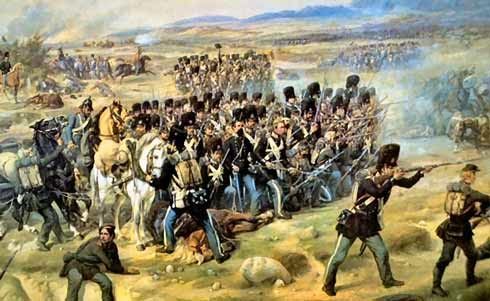 The Royal Danish Foot Guard would see action again during the Great Northern War, in the Schleswig Wars of the 19th century - notably at the Battle of Isted, and again in WW2, as they defended the King’s residence, Amalienborg, when the Germans swept through Copenhagen on April 9th 1940. Moving forward to more present day operations, the regiment was active in Iraq and involved in the operations in Afghanistan, were they lost 14 soldiers in the Helmand. 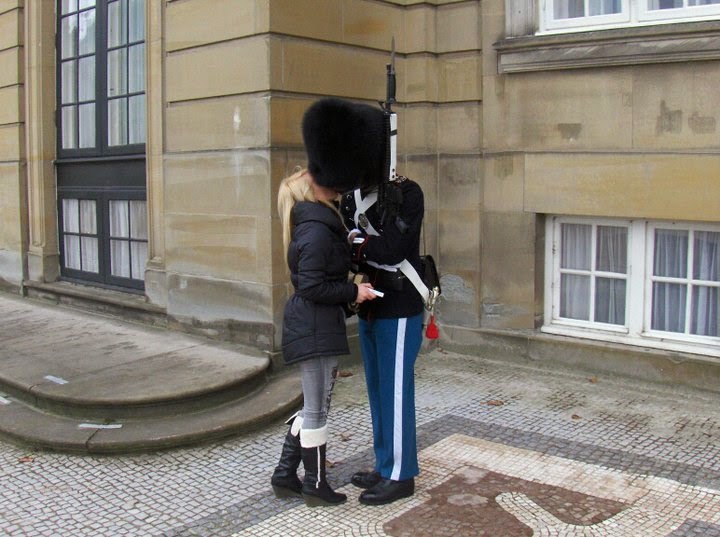 The Guardsmen are always happy to "give directions" to the many tourists.

As a personal anecdote, I’d like to tip my hat to one particular Guardsman – my grandfather. It was he who spurred my historical interest. My childhood holidays were spent in Copenhagen with him, were we paid countless visits to the Royal Danish Armory and the Royal Danish Navy Museum. I’d listen with awe as he told me about Denmark’s countless fateful battles against the Swedes, or about the naval Battle of Copenhagen in 1801 fought against Lord Nelson. My grandfather served in the Royal Foot Guards, 2nd Company of 2nd Battalion from 1949 – 1951. 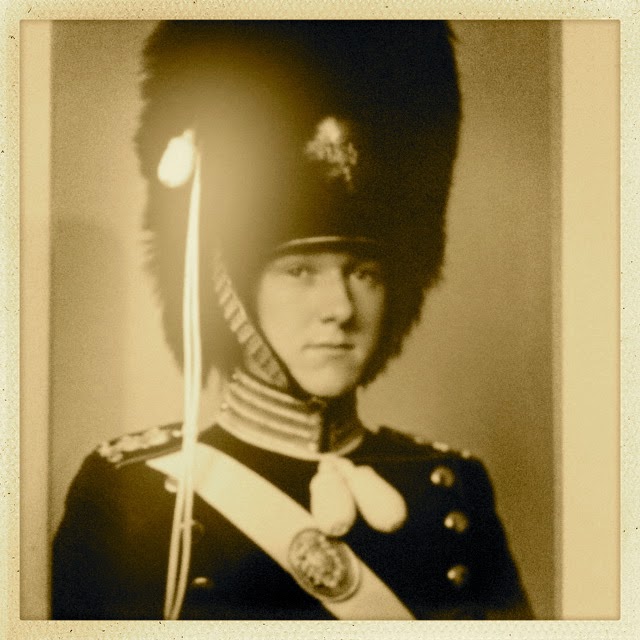