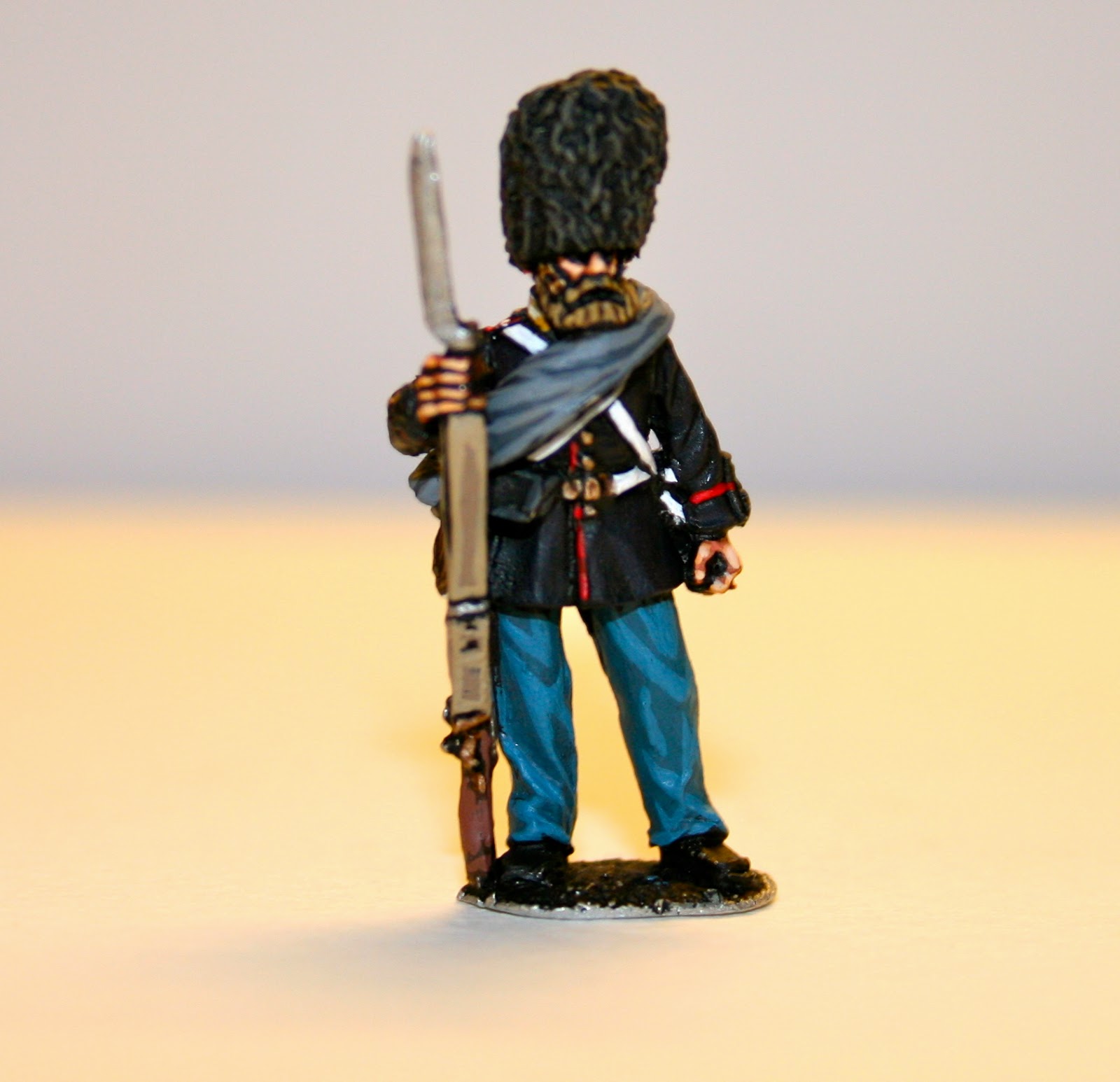 Safely back from Salute and a very sunny London, it was time to open the bags and drool over the loot.

Learning from previous years many impulsive buys, I tried to approach this year's enticing offerings of Salute with a plan including a great deal of pre-ordering. I wanted to focus on purchases that could add to existing collections, and only allowed myself to start one new period - The Punic War (inspired by the newly launched Agema products and the announced range from Victrix coming later this year). 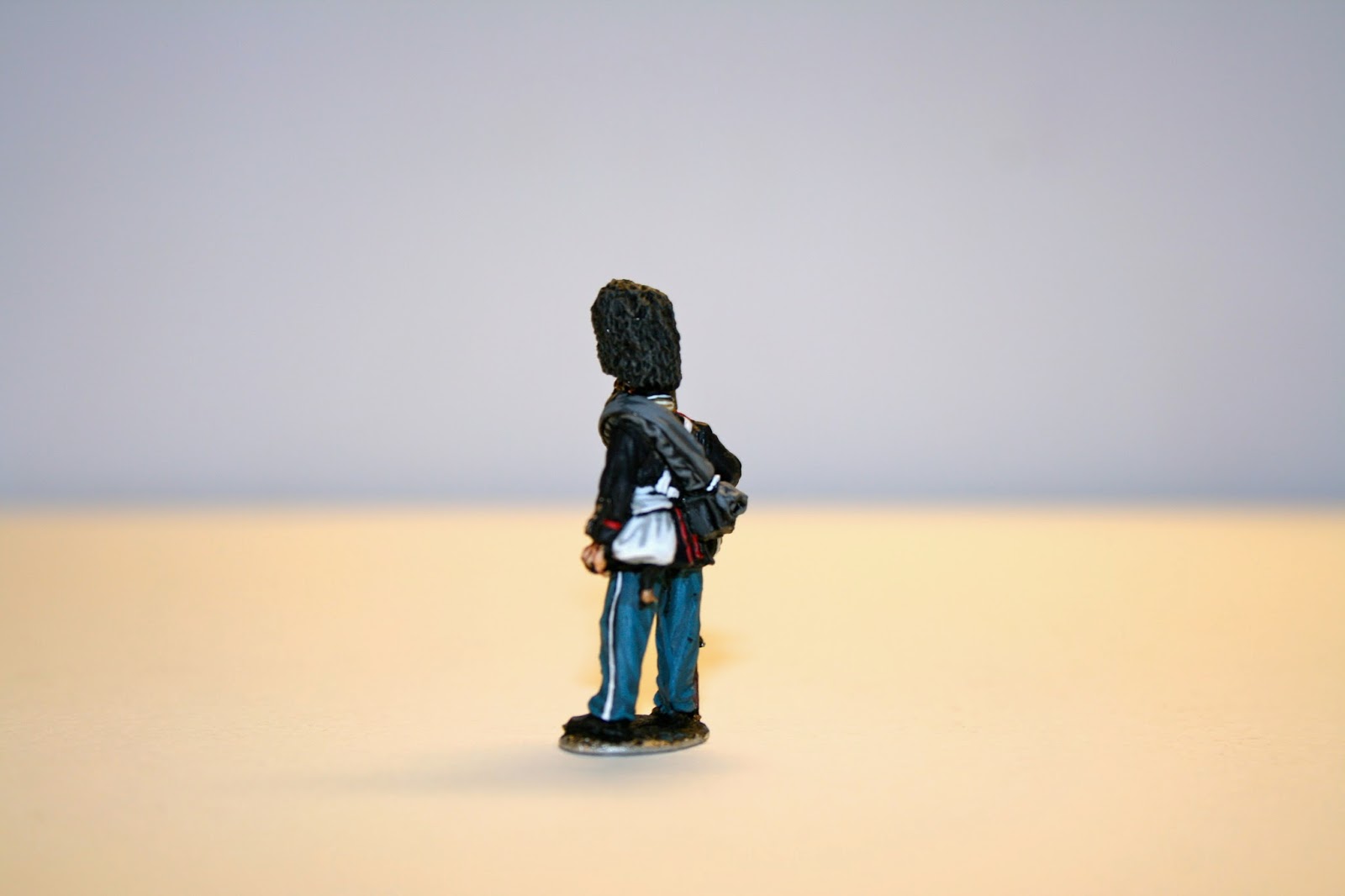 Side shot of the Guardsman

This post will deal with the buys adding to existing projects, namely my 19th century collection focussed on the series of wars of German expansion. 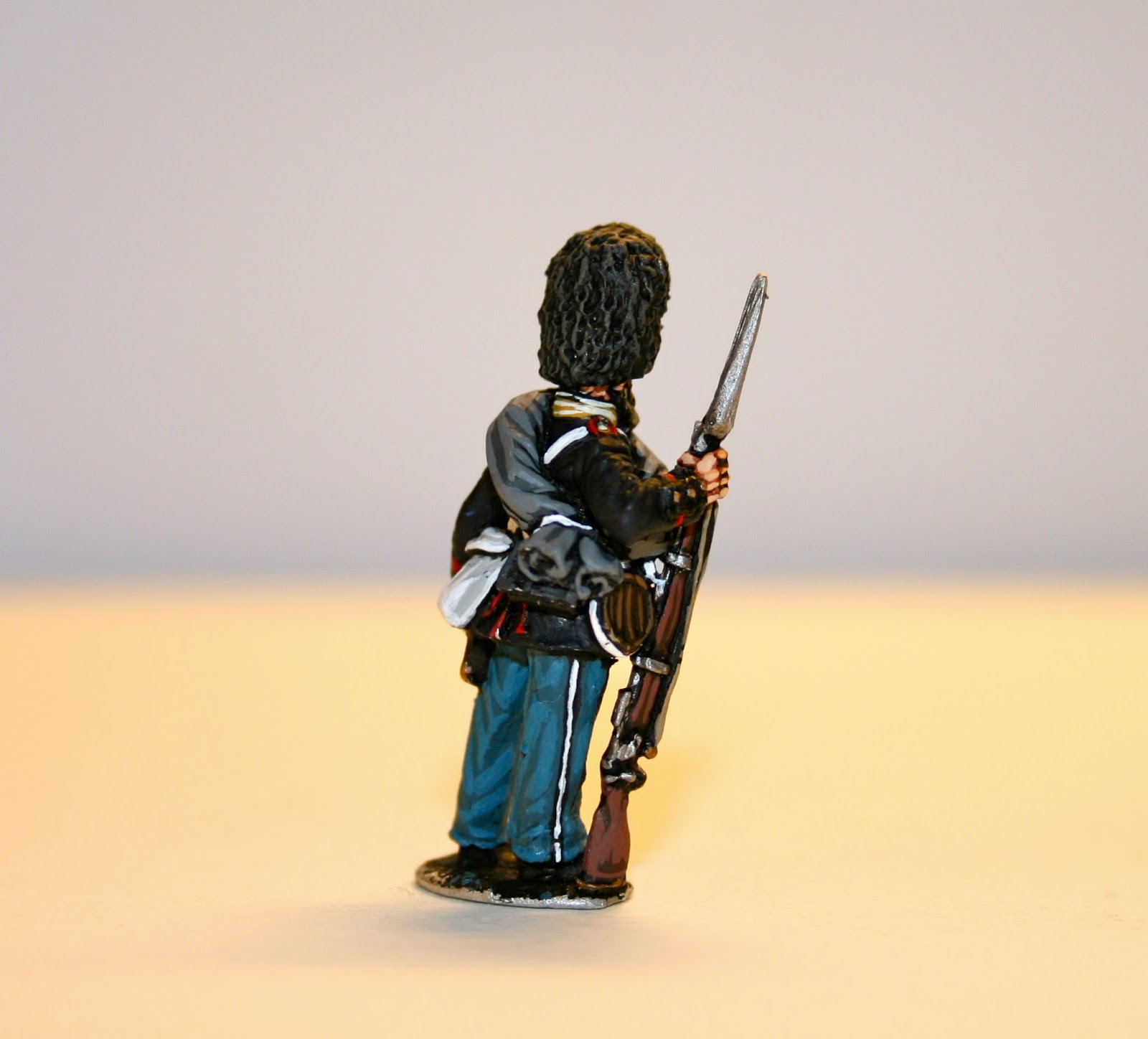 Rear shot of the Guardsman.
The blue jacket was adopted in 1848, replacing the red.

As Prussia lead the German states in their way towards unification, pretty much all the neighboring countries got a beating, and Denmark was not spared. The first Schleswig War in 1848-1850 however saw Denmark repel the German attack and the claim to detach the Southern Danish / Northern German states of Schleswig and Holstein. 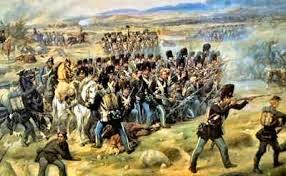 The Guard getting down to business at the Battle of Isted 1850.

I've long wanted to build a Danish army for this period, and now the PERRY BIF range offers the figures to create the Danish Guard Infantry - probably best remembered from their participation at the battle of Isted. Adopting a uniform very similar to the British model, I found this too tempting not to try out. No conversion needed. 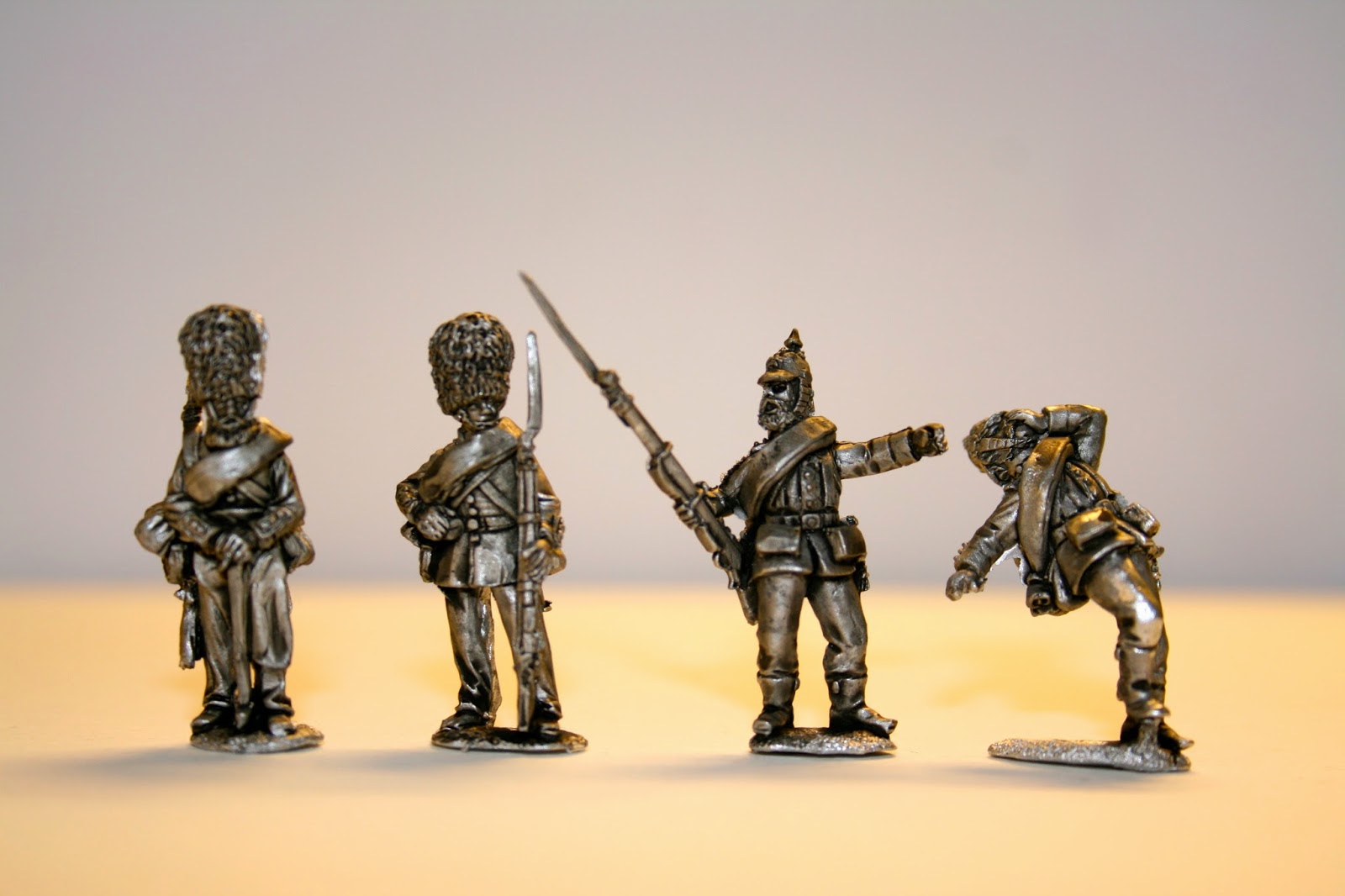 A natural stop was NorthStar for completing my Prussian army.

In addition to the excellent infantry sculpted I think by Alan Marsh, I also bought a battery of the new Krupp gun released a few weeks before Salute. Hopefully horse & limber will follow. 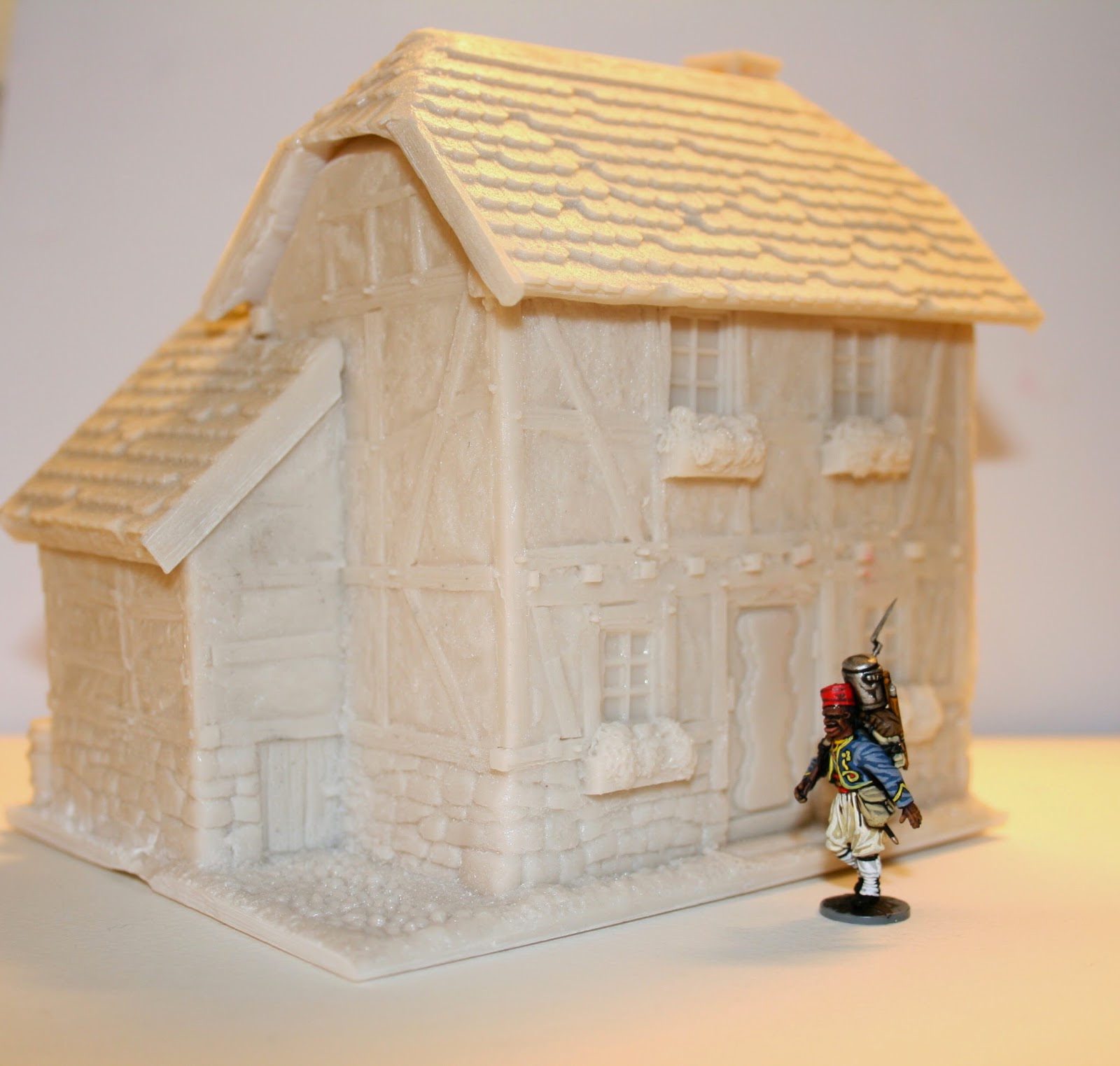 To set the Franco-Prussian eastern French battle field mood of Woerth, Mars-la-Tour and Gravelotte St-Privat, I decided to go with Grand Manner's resin range of Napoleonic Europe. Although pricy I think it really offers that little extra for the money. It's hard to catch in the pictures, but there is a fantastic level of details on the surface of the model, something that will create depth and help when it is time to paint, applying shadow and highlights on a natural relief. 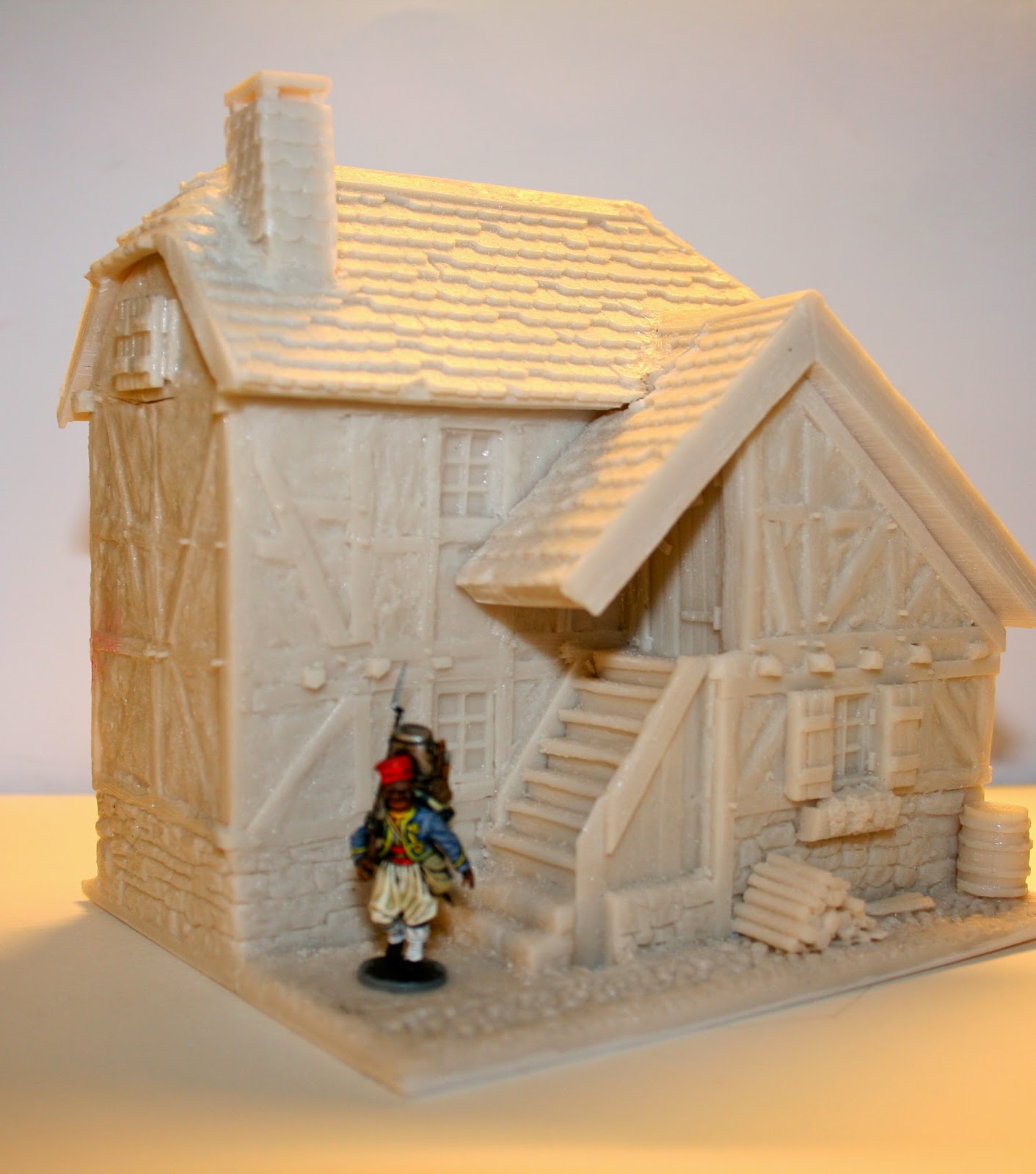 Alsacian house seen from the back.
Again I'm impressed with the level of detail on the resin building.

The size of the model building it self is also something that can be complemented.
It really is a natural 28/25mm building, and will fit both my Napoleonics and Franco-Prussians.
Plus I really like that the range is so wide, offering me many more buildings to mix in there as I go along. 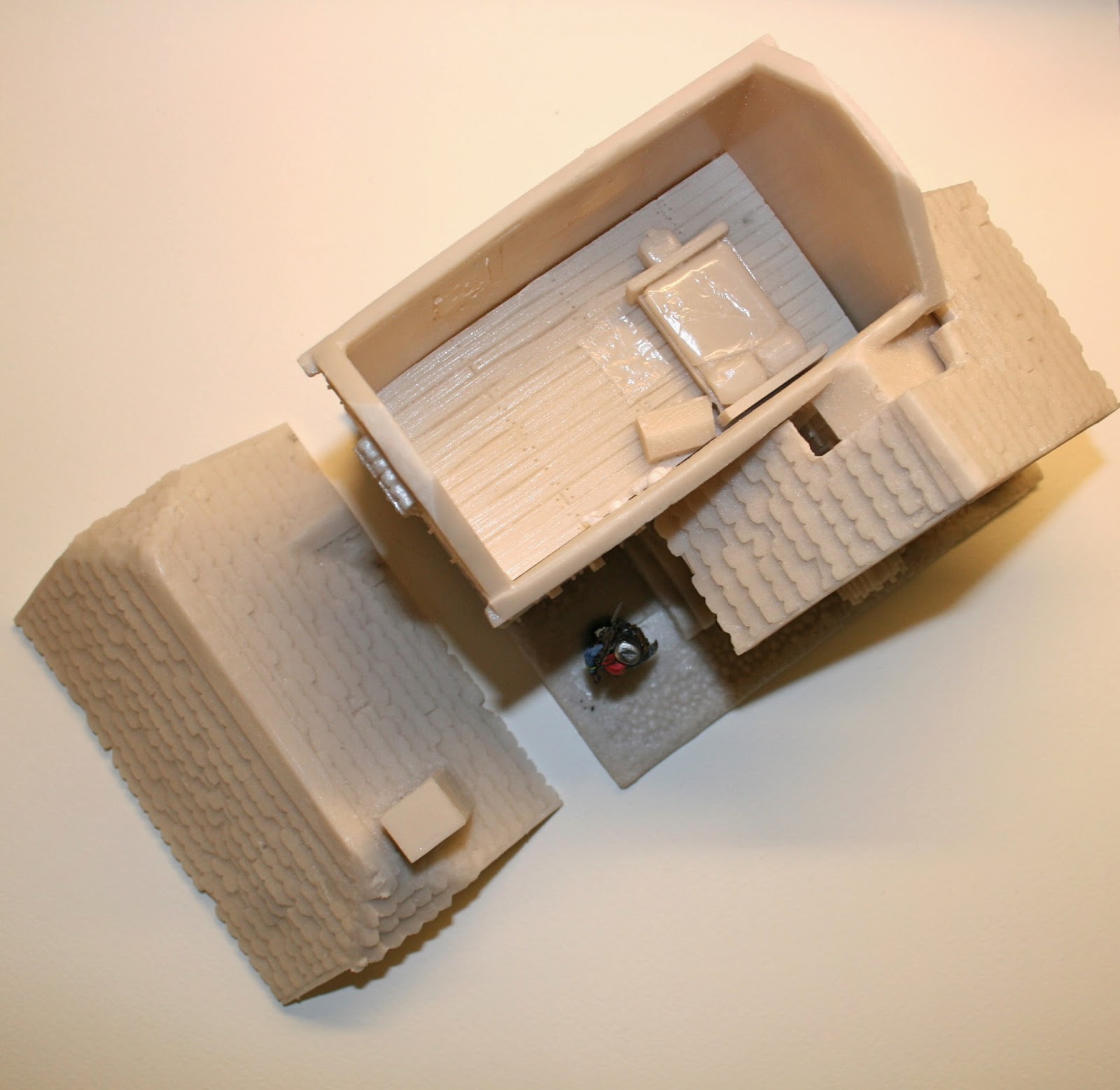 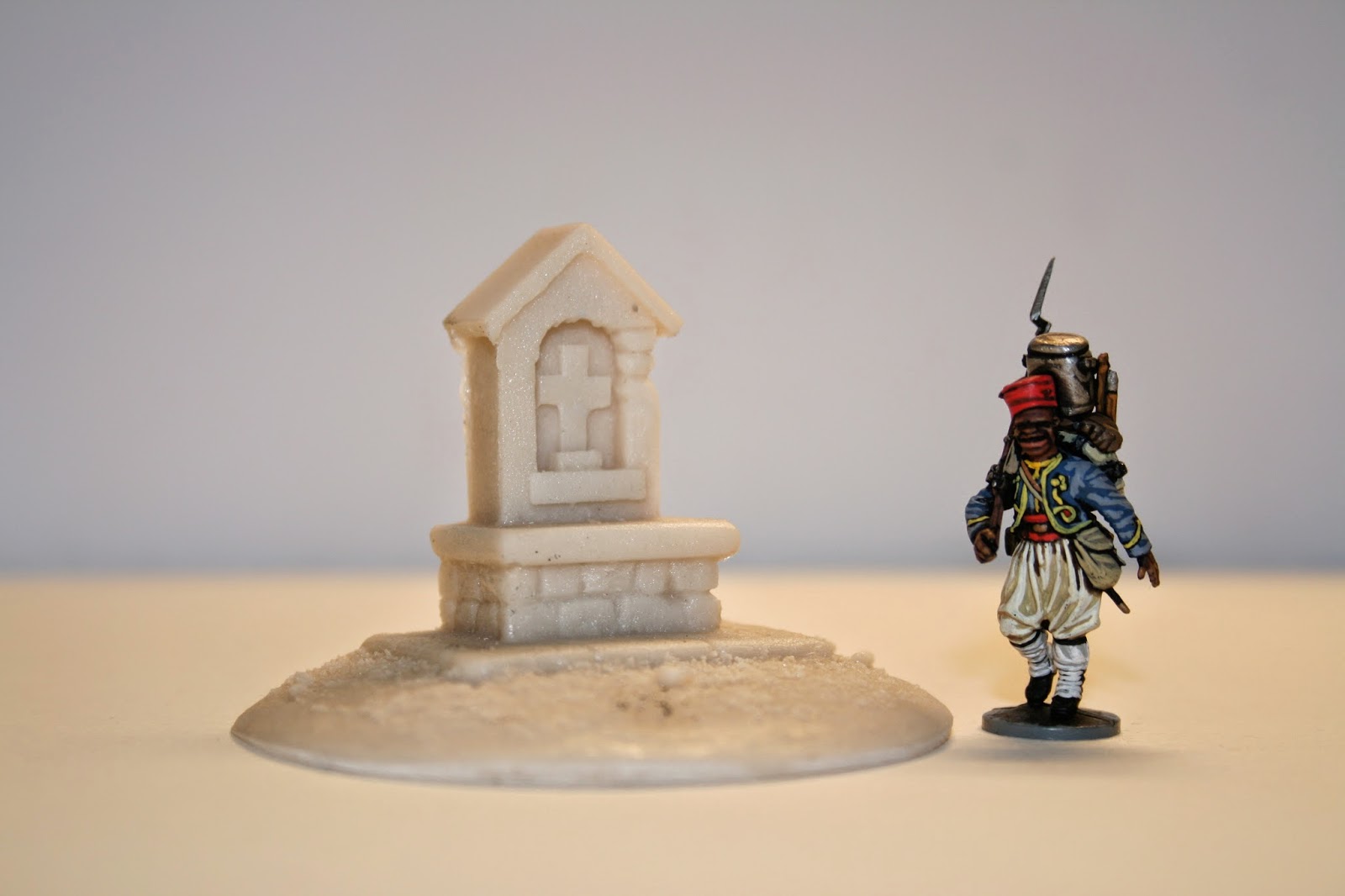 Naturally for the French country side I had to add a village shrine.
Again the busy Turco is marching along for a size comparison.
Grandmanner product code NAP19.

Last stop was Warlord for a pre-ordered laser cut Chateau from Sarissa Precision Ltd. The model is marketed as a WW2 terrain piece, but I find it perfect as a Franco-Prussian War "Loire Campaign" Chateau - for the Republican part of the war. When I first saw it, it immediately got me to think about the Detaille painting on Champigny. 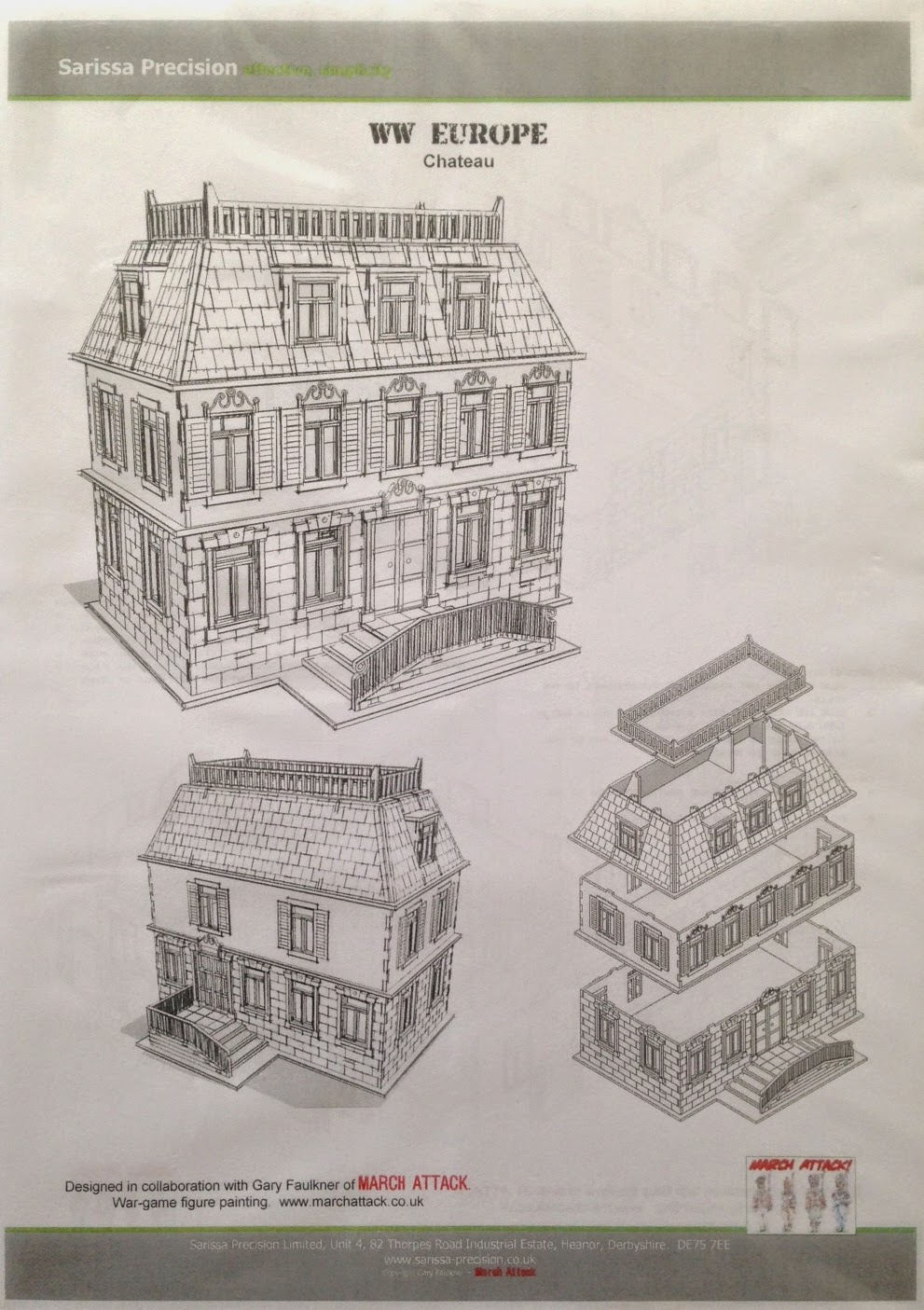 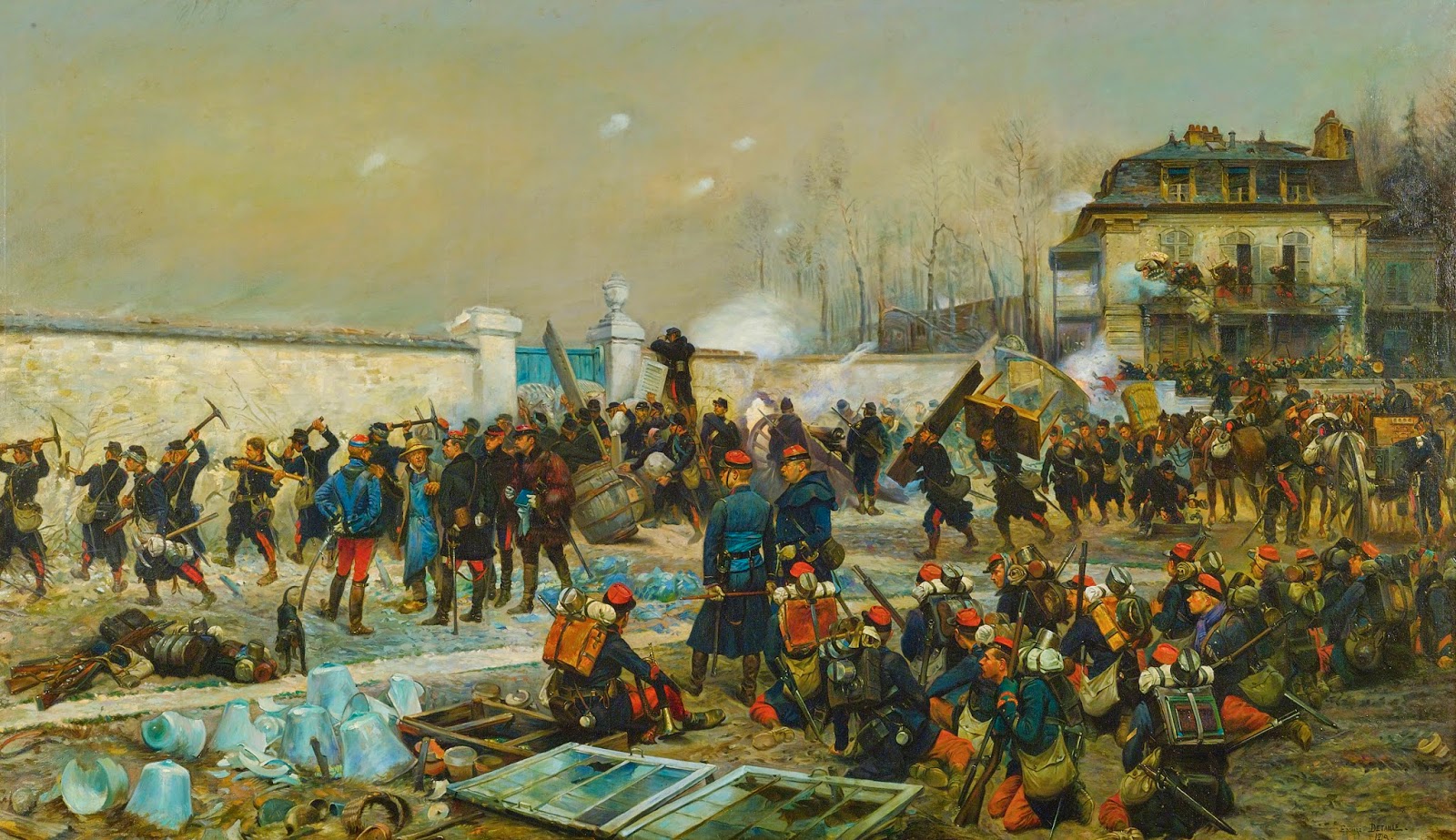 Detaille's painting on the Champigny battle.
The chateau in the background was my inspiration.

Thank you very much for reading!
Posted by Black Powder at 02:47