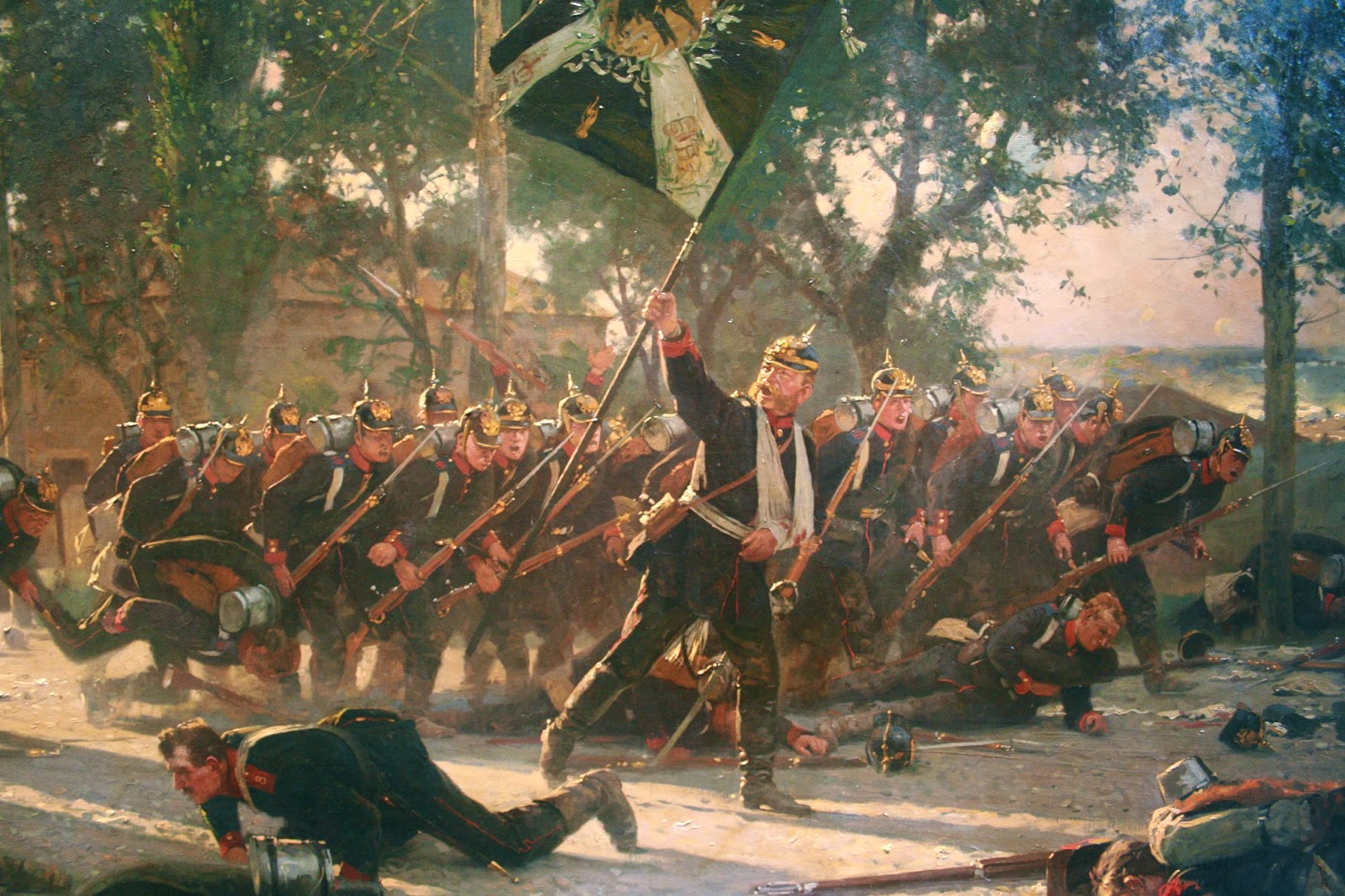 In part 1 we looked at the events and terrain of the southern segment of the battlefield, mainly concerning Steinmetz costly attack through the Mance Ravine and up toward St. Hubert and the Moscou Farm. Now we focus on the last act of Moltke’s battle plan  – the attempt to outflank and roll up the northern French position, chiefly constituted by Canrobert’s VI Corps dug in at the town of St. Privat. Photos are from my actual visit to the battlefield.

I admit, it was with a sense of respect and a profound feeling of being in touch with history, that I stood in St Privat about a month ago now, looking down the slope toward St Marie aux Chênes, from where the Prussian Guards would make this fateful attack on the 18th August 1870, in perhaps the most famous of all battles during the Franco-Prussian War. 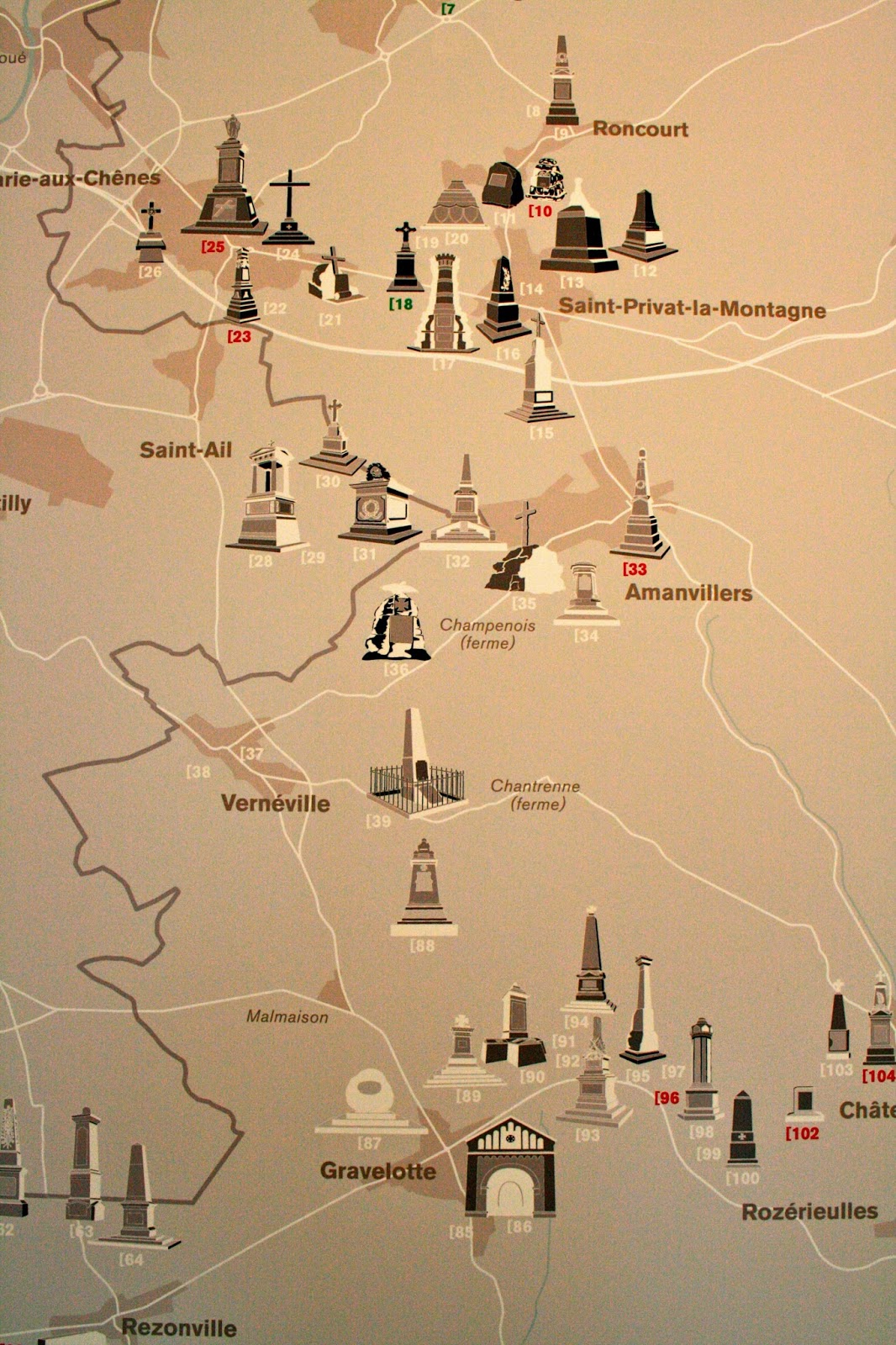 For the important outflanking task, Moltke chose the excellent Prussian Guard Infantry Division, perhaps the cream of the entire Army. They would start their march from an area south west of the battlefield, and during the day cross the entire German front, finally around mid-afternoon, making it up the position from which they would launch their charge. 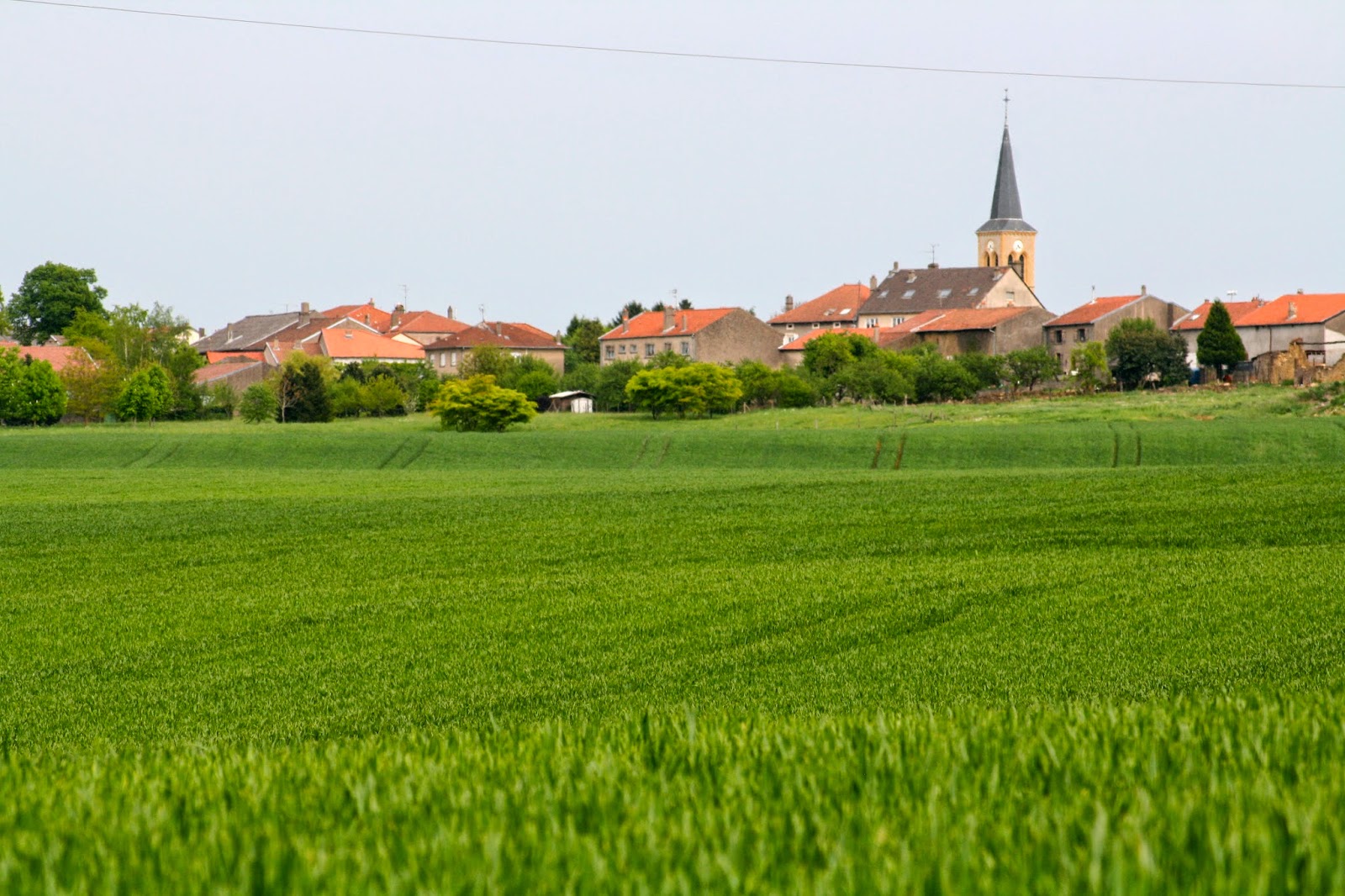 The 18.000 Prussian elite soldiers anchored their position and the left flank in the small town of St Marie aux Chênes, directly at the foot of the slope rolling down from St. Privat in an east-west orientation.

Between them and the entrenched French troops of Canrobert lay about 1.000 meters of open uphill ground. They would be faced with merciless fire from Mitrailleuse machine guns, artillery and the very precise French chassepot rifles. 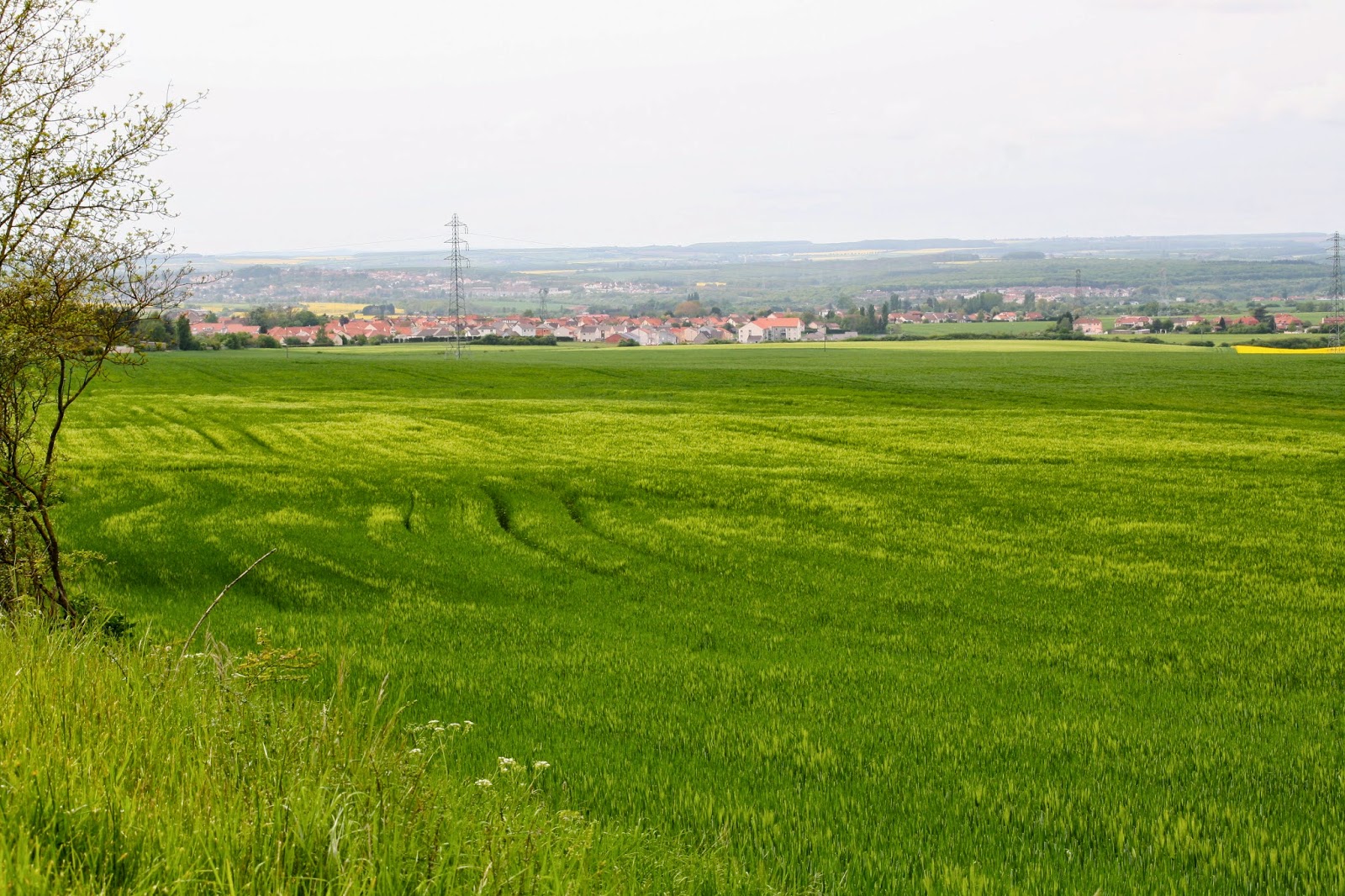 The view from the French position.
St Marie aux Chênes at the foot of the hill.

Steinmetz’s attacks on the southern flank had all but failed resulting in nothing but appalling losses. The centre stagnated despite continuous artillery efforts, as the German command simply deemed the French position too strong for any more frontal assaults. In other words, it all came down to this final charge of the Prussian Guard. It was make or break. Would the French finally get their much-needed moral victory, or could a brave dash for the St Privat position break the French flank, and send them running towards Metz, thus saving the day for Moltke and the Germans? 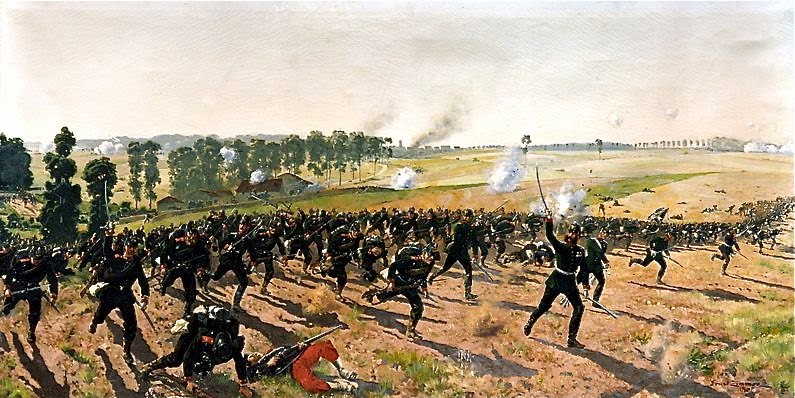 A charge over open ground - costly business.
The French would inflict almost 50% casualties on the Prussian Guard.

The 3rd Guards Inf. Brigade launched the assault at around five in the afternoon.
As they went up the open field towards St. Privat, the rest of the Division was neatly lined up and stoically awaiting their turn, all the while suffering heavy losses to French artillery. It was a true testament to the iron discipline of the Prussian forces, as the men quietly absorbed the fire. 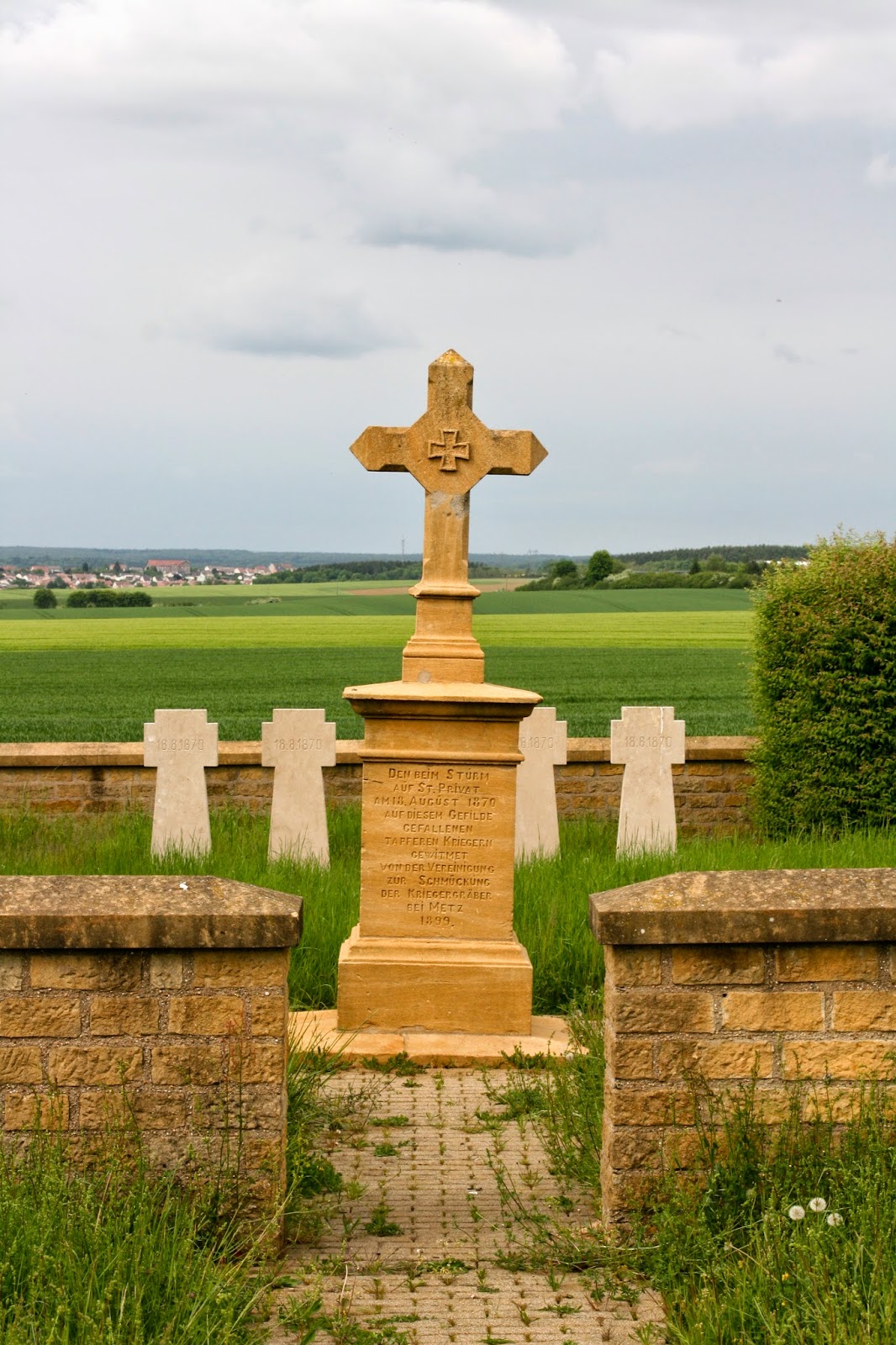 Churchyard and small memorial situated on the slope
between St Privat and St Marie aux Chênes.

The 3rd quickly got pinned down, so did the 4th and the 1st when they followed. It was not until the complete Division was committed and after the Crown Prince had ordered a focussed artillery effort to soften up the French, that the Guard finally reached all the way up the hill to St Privat. 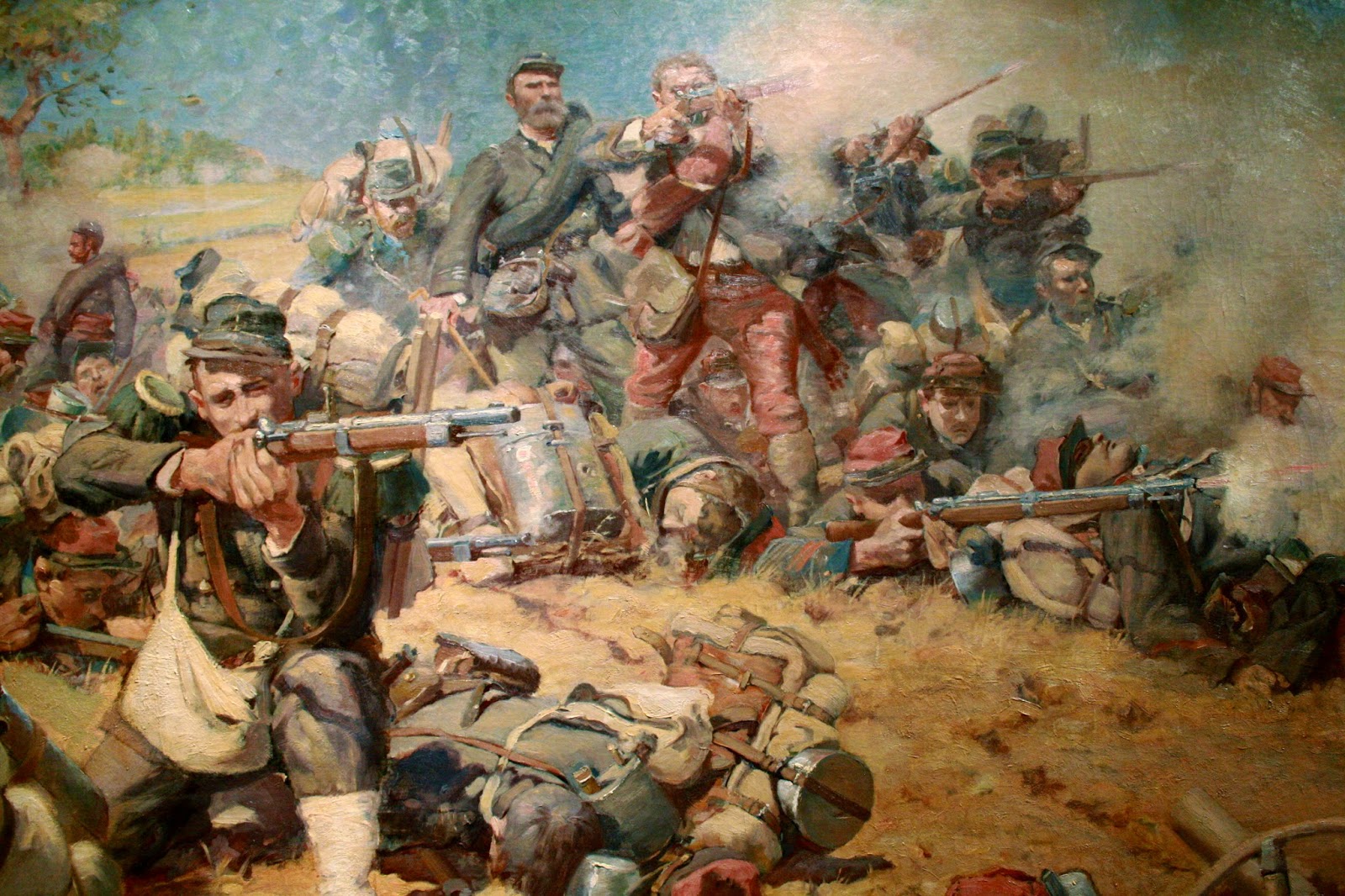 The small stone build farm walls acting as initial defense for French infantry were overrun. Prussian Guardsmen were chasing the French up the streets toward the centre of town, while a deadly infilating fire from houses and roofs broke on the advancing pikkelhubes. 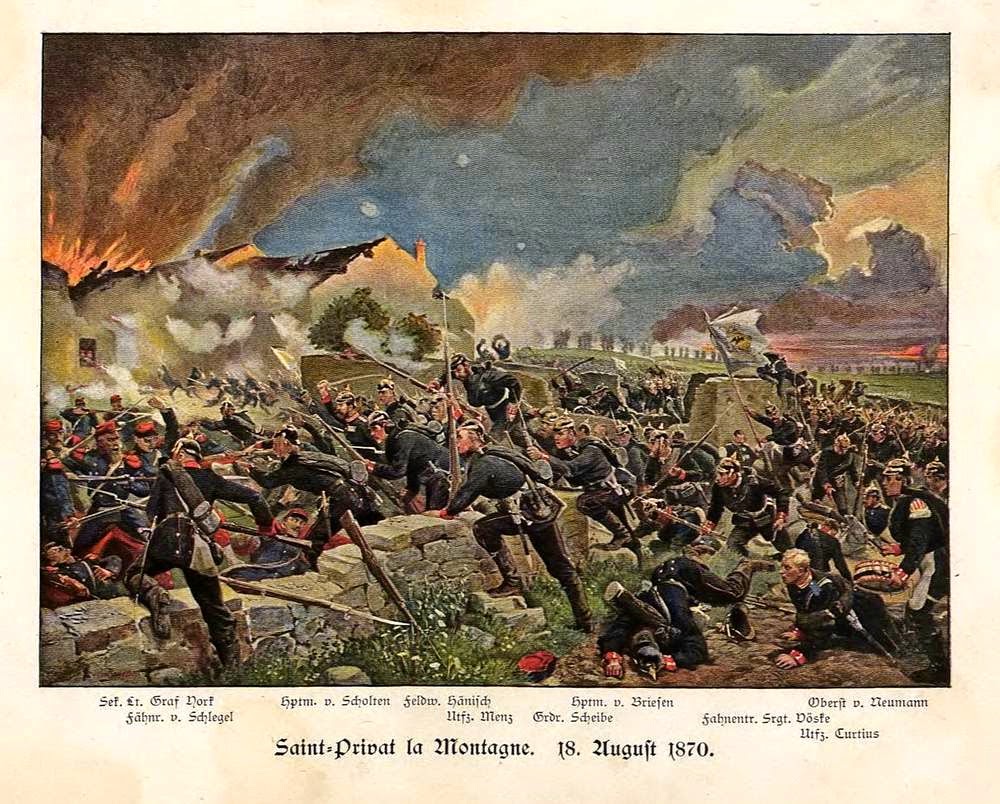 With most of the city ablaze from the previous Krupp artillery fire, the French fought doggedly with the Prussians in a bloody close quarter struggle. Canrobert, realizing upon visual contact with the Prussian Guards Division earlier in the afternoon that his position was in danger, had called to Bazaine for reinforcements.  Bazaine initially declined, but finally and definitely to late, gave Bourbaki and the French Guard Infantry orders to move towards St Privat in an effort to help Canrobert. 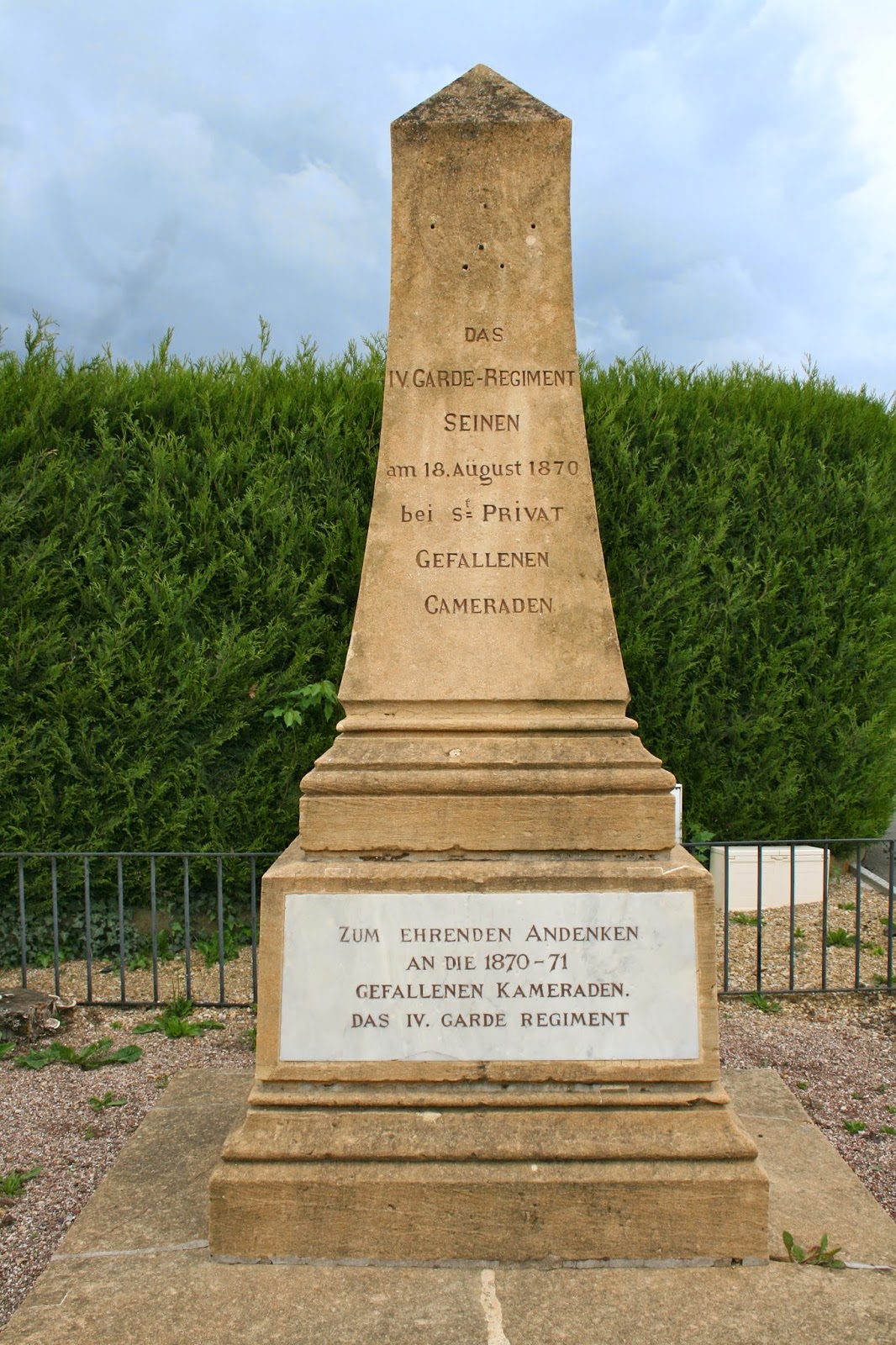 Roadside memorial in the outskirts of St Privat.
Commemorating the heroic charge of the 4th Guard Regiment.
Faced with the complete onslaught of the Prussian Guard Canrobert’s men finally broke, and made a run for it. As the centre of the French position saw their Northern-right flank break, they too decided that they had had enough. It was a general retreat. The French Guard and Bourbaki, committed too late to the battle, could do nothing but act as rear-guard defusing any German appetite to follow the running French. 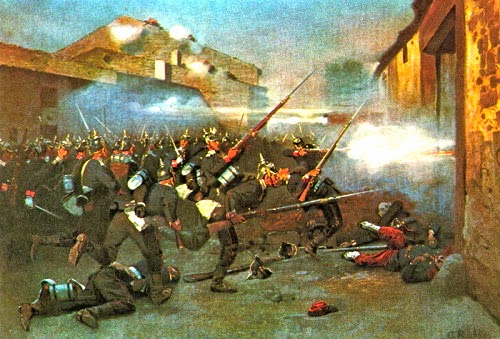 Inside St Privat a wild house-to-house fight broke out.

The gallant Prussian Guard had succeeded, but at a great cost. Of the 18.000 troops launched in the uphill attack on St. Privat, some 8.000 lay dead on that gentle rolling slope as evidence to Prussian discipline and determination. 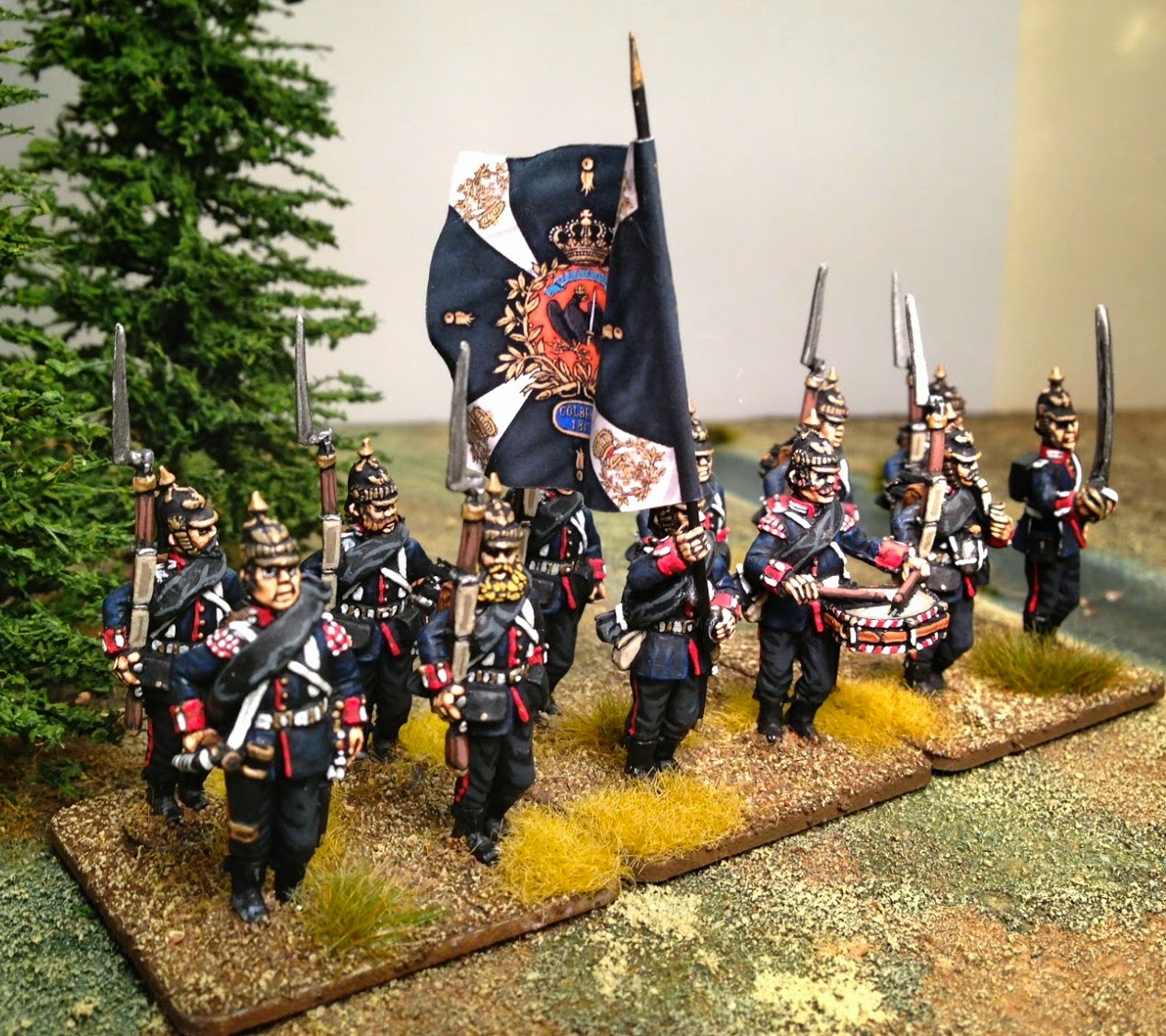 The first Prussian Guard unit I painted.
Figures are from NorthStar's 1866 range. Flag is GMB.

Total German losses were just over 20.000, mainly thanks to Steinmetz. French losses were 7.800 killed or wounded, with another 4.500 taken prisoner. The Germans had paid a high price at Gravelotte St Privat, but they achieved their strategic goal; to prevent Bazaine in escaping from the Moselle and uniting with MacMahon. Bazaine was now caught in Metz, and would eventually succumb and surrender his 100.000 strong Army of the Rhine.

Thank you very much for reading!
Posted by Black Powder at 05:33