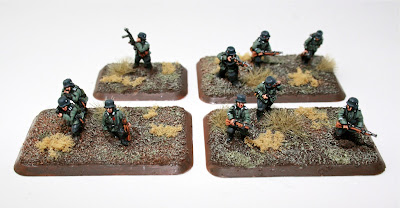 The first  Zug is finished.
15mm "Blitzkrieg" minis from Skytrex.

As everyone is talking Waterloo these days, I thought I’d use this, my 100th by the way, blog post to highlight another, perhaps less known, anniversary in military history. At 3:15 am on Monday the 22nd June its exactly 74 years since the greatest land battle of all times started – the Nazi invasion of Communist Russia, codenamed “Operation Barbarossa”. 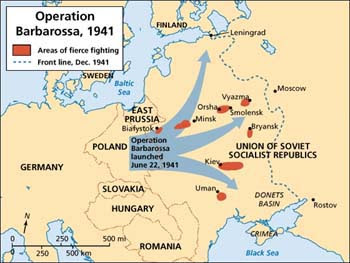 It marked the end of the so-called “Molotov-Ribbentrop Pact” of Non-Aggression, signed in 1939, and would prove the beginning of the end for Nazi rule in Germany. It would have a fatal outcome for hundred thousands of soldiers and civilians, and it would be the stage on which some of histories most gruesome war crimes were committed.

The six man rifle team - according to  the Chain of Command rules.
Casualties will be removed with markers, and full bases when possible.

With the aim of building a 15mm collection for the period of Barbarossa (41-42), I was first of all looking for suitable German Blitzkrieg infantry miniatures. While many producers out there offer good products for the Early War period, I decided to go with Skytrex for the infantry. They really are wonderful sculpts, and I like the weight compared to plastic, when I’m basing this small scale.

Cuff insignia for Infanterie-Regiment Großdeutschland.
Tried to add these on the 15mm minis, with varied success.

Next question was what unit to paint up. I wanted a unit that had participated in the initial stages of Barbarossa, but also one, which was later involved in Fall Blau and Wintergewitter. After some advice from co-club members Ulf and Jesper, I decided to go with the Großdeutschland regiment. It’s history really runs deep on the Eastern Front, and it offers versatility of deployment, as it later became upgrade to a panzer reg.

MG34 and Obergefreiter with MP40.

As a further bonus for me, Großdeutschland was part of XLVI Panzer Corps,
of Panzer Group 2 commanded by Heinz Guderian, somewhat a personal favorite among the many capable German army commanders. 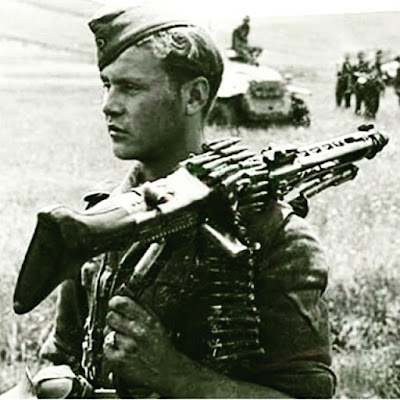 Großdeutschland have a fascinating history, including dark as well as bright chapters.
My plan is to touch on all aspects, and post for post follow the unit in a chronological way, from the kick off of Barbarossa on the 22nd June 41, until the last remains staggered up towards the Danish border to surrender to the much preferred Brits in 45. 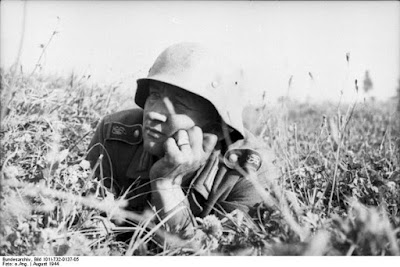 Großdeutschland trooper having a pensive moment at the Eastern Front.

It will be a dramatic journey, including war crimes, near annihilation and heroic counter charges. In other words; to be continued.

Thank you very much for reading!
Posted by Black Powder at 01:22 24 comments: 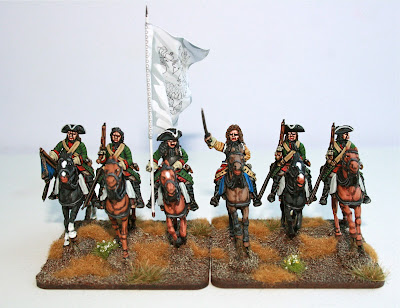 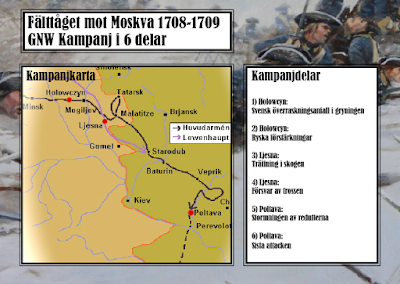 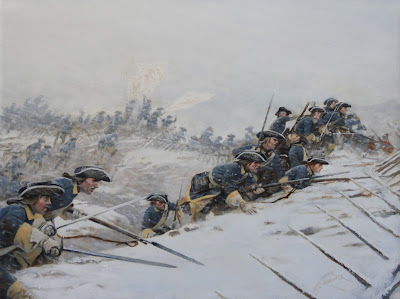 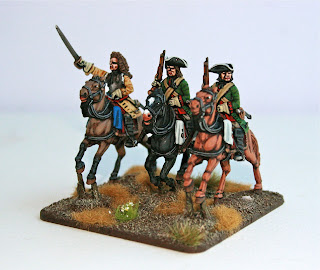 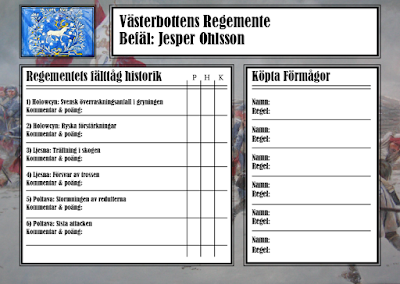 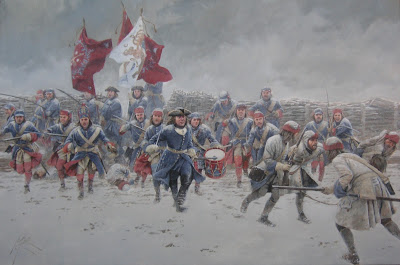 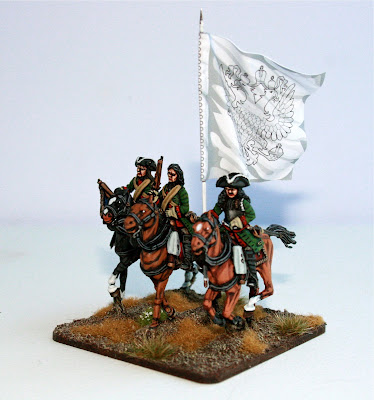 Thank you very much for reading.
Any comments are welcome!
Posted by Black Powder at 06:13 39 comments: 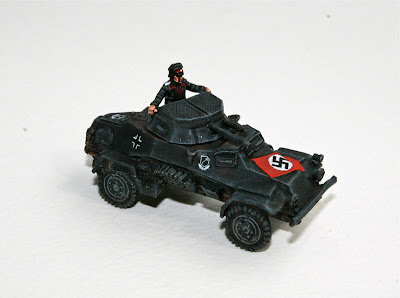 The SdKfz 222 as I imagine it during Barbarossa.
Model is from Skytrex, but the crew is PSC.

As my 15mm SS-Panzer Division blasts eastward from my painting desk, its eyes and ears will be supplied by some good reconnaissance for the panzers and Stukas to rely on. The backbone of my Recce force (Aufklärungs-Abteilung) will consist of this quintessential WW2 vehicle, the SdKfz 222. 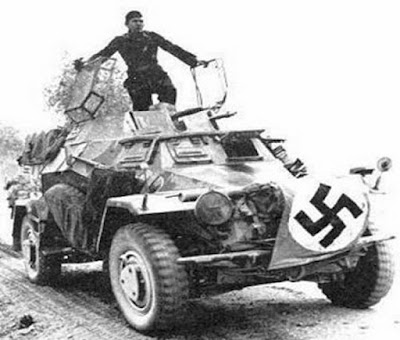 The Nazi flag was used for easy aerial recognition.

As this blog is stripped from any political or religious views, I find it important to underline that the depiction of a Nazi flag on the model, is merely a historical reference with a purpose. Many vehicles were actually fitted like this during Barbarossa, as the red flags with the white centre circle helped the Stukas tell friend from foe, in the heat of battle and avoid unfortunate mistakes. 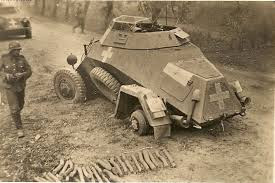 Life on the road can be hard.

The SdKfz 222 was designed by the Eisenwerk Weserhütte, and built by the Auto Union (Better known as Audi). Supplied by a powerful V8 engine, this four-wheel drive sported armor plating up to 14,5 mm thick, but still ran up to 80 km (50 Mph) on open roads. Fuel economy and Global Warming was not something that would keep engineers up at night in the 30ies, and the SdKfz only had an operational radius of 300 km (186 Miles), before refueling was needed. 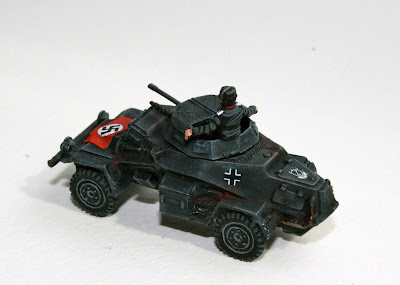 To help the SdKfz 222 “clear the way”, it was armed with a L/55 Auto-cannon plus supporting MG of different calibers as the models approved over the years. Another improvement that was added, probably by way of bitterly earned learning points, was the wire mesh across to the open-top turret, to avoid any unwelcome visits of grenades into the armored vehicle’s cabin. 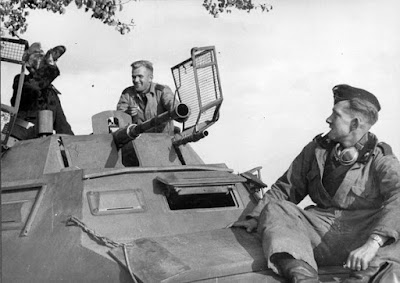 A view of the metal mesh,
added to protect against grenades thrown into the turret.

With almost 1.000 SdKfz 222’s produced from 1937 – 43, this recce vehicle was one of the most important in the fast moving and mobile Blitzkrieg engine.

Thank you very much for reading.
Any comments are welcome!
Posted by Black Powder at 02:21 23 comments:

Robotech - a faiblesse for Mecha! 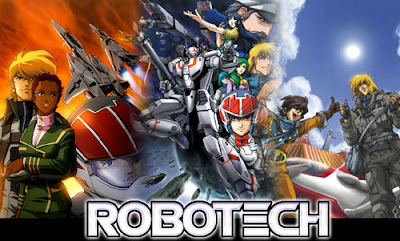 Dear readers, just a short message to give a heads-up to any fans of the classic 80ies Robotech series. I'm starting a collection in conjuncture with the release of the Robotech RPG Tactics 6mm miniatures game from Palladium. 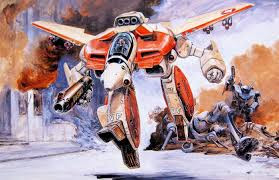 For anyone who grew up in the 80ies, like yours truly, Robotech represented something completely new. This show WAS my Saturday and Sunday mornings, as it was lovingly broadcasted to Denmark via SKY-TV and the DJ-Kat Show from the UK. I was dutifully up at 07.00 am awaiting the inferno of Mechas fighting of aliens in the struggle for domination over our planet. 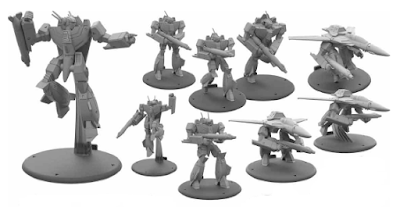 Some of the Miniatures for the game.
Palladium have really done a nice job on these!

Of course getting this game and painting up these minis is just one big cool trip down a nostalgic memory lane, but I would also highlight the very high quality of the minis produced by Palladium. They've done a great job, and from what I've painted so far, I've really had a great experience. 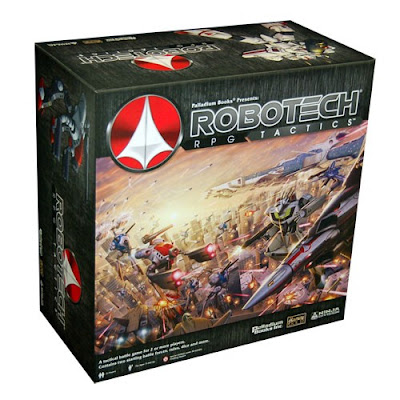 I will not be posting this collection on the Black Powder Games history blog, as I like to keep a tight format in respect for my followers. So, if you're like me, and have a sore spot for cool Mecha, then drop over to my second blog and list up as follower.