July 1, 1863 Pennsylvania
“The loss is fearful, and I can only hope that the country may not again require that these brave men shall go through so severe an ordeal.”


Brig. Gen. Lysander Cutler
BACKGROUND
During the summer of 1863 the seemingly invincible Confederate Army of Northern Virginia invaded the North once again in the hope of securing independence through a decisive victory. As the long gray columns foraged across southern Pennsylvania, Lieutenant General A.P. Hill, informed that the town of Gettysburg held a large quantity of badly needed shoes, ordered major General Henry Heth to take his division and investigate.
Pettigrew's Brigade of Heth's Division, upon nearing the outskirts of Gettysburg, observed columns of blue clad cavalry entering the town. Not wishing to bring on a general engagement Pettigrew withdrew. Both Heth and Hill, however, believed that the troops encountered by Pettigrew were merely State Militia and could therefore be easily pushed aside. Unfortunately for the Rebels the troops now taking up a defensive position astride their route of march were the veterans of Brigadier General John Buford's First Cavalry Division. Buford had recognised the importance of the terrain around Gettysburg and the necessity of denying it to the Rebels.
As his men advanced into contact Heth was forced to delay his attack as his troops deployed. Finally at 10 a.m. Heth ordered the brigades of Archr and Davis forward. Buford’s troopers had been skirmishing for almost two hours against the Rebels and now fell back as the First Corps finally arrived to relieve them.
Buford's casualties were fairly light but the two advance brigades of the First Corps took heavy losses, 299 killed, 1,229 wounded and 627 missing. Archer and Davis also took fearful losses battling against the Federal infantry. Overall Confederate losses were 196 killed, 861 wounded and 571 captured or missing. 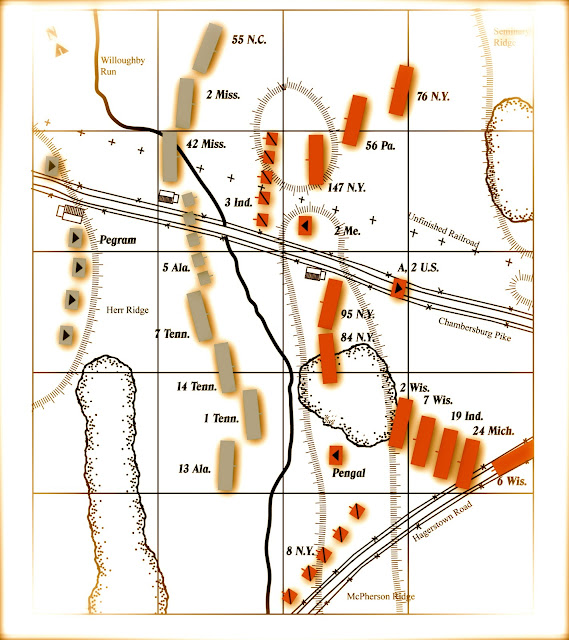